Sunday, day #4 and last of the Saskatoon Ashley Richards Memorial Chuckwagon Races.  A week goes by so fast when your doing something that you enjoy.  Duncan and Karina do have time to just hang out and have some fun.  They have been meeting a lot of the other young adults that have been hired by other drivers.  They represent different countries such as Switzerland, France, Australia, Germany, New Zealand and Ireland to name a few.

They got up on the liner to get a birds eye view of our camping spot here in Saskatoon.

A Panoramic View from Above

The races were early today beginning at 2:15 pm.  It really makes us adjust our day when the races are start at that time.  The air was pretty chilly for a better part of the day.  So much so that Rick put on his long johns one more time.  When you travel the roads like we do, you come prepared with every piece of clothing just in case.

Well, I woke up 2 mornings ago to shredded toilet paper in my cupboard under the sink.  This only meant one thing………. we had an intruder.  And one that I really don’t like.  I got the rat poison out and my bag of traps that were stored in a drawer.  The poison might work well, but I like to have proof!  And I got proof.  I think it was 3 am when I heard the “SNAP!”  Oh I was so glad when I had to remove it from the trailer.  And I hope that there will be no more.

This weekend, our outriders were Chance and Casey.  They went penalty free for us all four runs and did one hell of a job handling the horses, mounting up and riding around the track to be within the 150 feet of the wagon as it crossed the finish line.

Our Chuckwagon Sport, relies on sponsors to keep us going.  GMC has been alongside the World Professional Chuckwagon Association for some time now.  We thank them for all their support.

On the Back Stretch

Our hook today, was Spin on the Right Lead, Bacardi on the Left Lead, Law on the Right Wheel and Jim on the Left Wheel.  Spin was the only one not to perform up to standard.  Despite that, we posted a 1:19.27 which was good enough for 4th on the day which also brought us up to 17th overall.  We are continuing to hold down fourth in the world standings.  So we`ve had a pretty good run so far.

The little gal who received the mini chuckwagon today wasn`t quite sure what to think.  Maybe she was just a bit shy of getting her photo taken, and dad was elated to hold onto her prize. 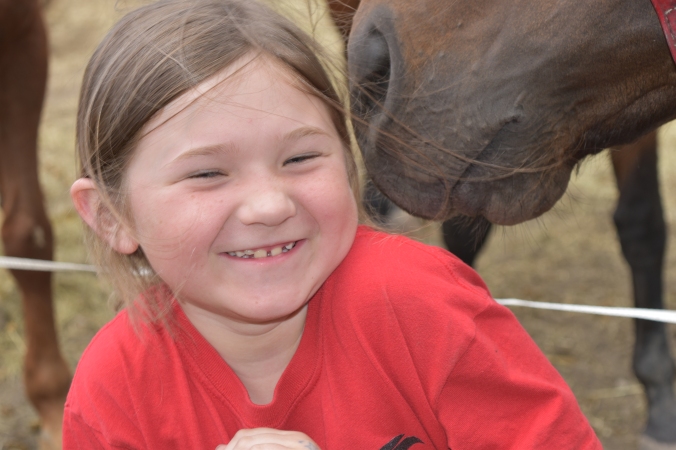 Kids just make my day.  I have always enjoyed kids.  They bring joy and happiness into your life and help you to forget all your worries of the day.   We met Tallance and her family a couple of years ago when she received a mini Chuckwagon.  They came back to meet us and get Rick to sign it.  We`ve been friends ever since.

I rarely seem to get a photo with Rick and I together.  Today I pinned him down and managed to get a fairly good one.  So many people say how much he looks like his late uncle Dallas who also raced wagons a number of years ago.  As we are getting older, I see it too.

We are off too Southern Alberta, to the City of Medicine Hat tomorrow.  They are calling for temperatures in the range of 27 degrees on Monday, then rain for Tuesday and Wednesday.  Maybe, just maybe I will get 2 days of nap time to catch up on some zzz`s.