Such a busy day for me. With so many extras helping, my day just seems to fly by. I managed to sit for a cup of coffee out at the barn with the kids after breakfast before heading to the trailer to begin the cleaning and packing. Shanise, my niece, helped me clean the trailer and then I headed to the grocery store for another re-load. Made a quick stop to fill the truck with fuel for the trip tomorrow. Back at the trailer, the groceries were unloaded and put away. The fruit was cut up and supper was put into the oven. I made several batches of popcorn on the stove for the trip to Rocky Mountain House. Popcorn is a staple in our household. Everybody loves the way I make it. It’s even better than at the theatres.

No sooner had I got all that done when  the crew was in and out for supper, and Cody was harnessing his hook for the evening. Both Cody and Rick had superb runs.

Cody came flying off the 4 barrel with Air, Speirman, Speedy and Vegas. So much so that he stole the rail from the other three wagons. Rick was pretty excited. I didn’t realize he was sitting where he was until I looked at my photos. A pretty proud father, he is. 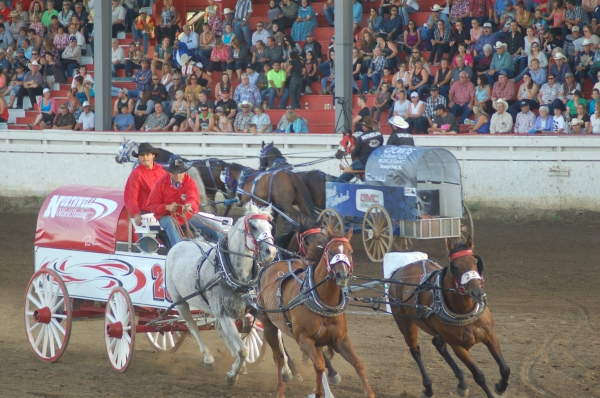 I love these photos of the guys together. A son learning the trade from his father. How cool is that?

Pulling out from a false start

Tonight fellow competitor Mitch Sutherland on barrel 3 had a false start. This means his horses jumped ahead after he stopped and before the horn went. This causes a false start and all the wagons pull out and regroup, then come back in again. Rick made sure Cody was able to jump in before he pulled out as Zorba, our grey horse, is very hard to hold. He didn’t want to chance having a runaway.

Charging at the horn

When the horn sounded after they pulled in for the second time around, the horses started hard.

Headin’ to the track

Three of the four wagons got to the track at the same time. Rick’s team had more speed and was able to overtake Gary Gorst by the second turn to take the rail. The horses were just running so fast, Spirit on the Left Lead, Spin on the Right, Zorba on the Right Wheel and Law on the Left. 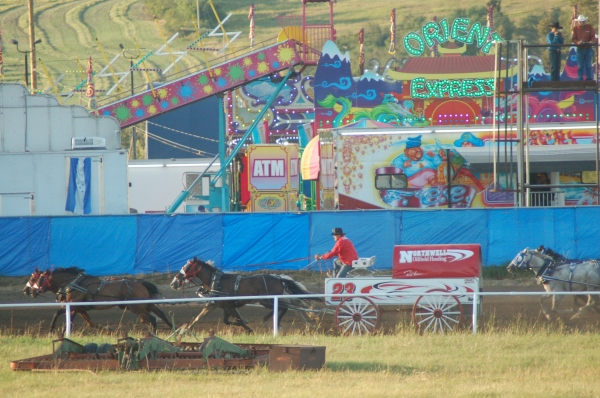 Ricky held the lead the whole way around. It was exciting to watch. We were hoping for a day money run.

Checkin’ for the outriders

Because he was so far ahead, Rick was checking back to see if our outriders, Cole and Rory, were within the proper distance as to not get a penalty. They were safe! Beau and Stadium ran hard. We ran a 1:14.32. Ricky held on to the lead for day money, up until the last heat. Then the new Dawson Creek champion, Luke Tournier, and Rae Croteau, Jr., snuck in to beat us. But we will still take third on the day. Best part about winning our heat was there was bonus cash for each heat winner. I just have to figure out a way to get it from Ricky!!! HAHA!

Better get to bed as it will be a very early morning rise. Rocky Mountain House, here we come!

What is right for one soul may not be right for another. It may mean having to stand on your own and do something strange in the eyes of others, but do not be daunted. Do whatever it is because you know within it is right for you.