We slept through pitter patter rain drops on the trailer throughout the night and into the morning.  It didn’t bother me, one bit.  I think it just put me to sleep.  When you get as much fresh air and exercise as we do in a day, and your head hits the pillow, its lights out!

The early morning hour came fast.  We donned our muck boots and headed out the door to do chores.  The ponies like to get out of the stalls in the morning, but if its raining, they want back in fairly soon.  So “Team 23” got at it and got the barn chores all done up, and put them back in out of the rain.

Rick and I headed to town after the chores were completed.  We  headed to the biggest western store in the north, Keddies Tack and Western Wear.  This is the tarp we proudly are carrying for the Grande Prairie Stompede this week.  It’s been several years since we’ve been racing, and finally we were able to pair up with the Keddie family and their business.  And to them we say “Thank You!”

This guy, is a new outriding horse, and his name is Whiskey.  He’s rather tall, and a bit of a handful taking him out to the track.  He’s a new horse, and I just had a hunch that the outrider would have his hands full.  And he was.  Whisky charged hard and Kale had a rough time getting on him, which accessed us a 1 second penalty for being late.  The horse just needs a bit more training and he will be good.

Turning the Top of 3

Because of the penalty’s already assessed to us this week, Rick decided to put some newbies on the hook.  He had Air (Left Lead), Ranger (Right Lead) Jim (Left Wheel) and Keenan (Right Wheel).  The wheelers are going to good!  Again just need some more practice.When the horn went, Rick managed to get them around the top barrel, but then coming back he wasn’t able to bring them back around the bottom barrel.  I told him when he got back to the barns that he at least should have knocked the darn barrel over. Missing the barrel completely costs one 10 seconds in penalty, knocking it over is only 5. So having this happen tonight. this puts us in the first heat tomorrow.  I think I will be in bed early tomorrow!

Tonight, my dad stopped in to watch the races.  I was so glad to have him come back and see us all.  His RV Park, Country Roads RV, are sponsoring Cody this week.

My Nephews kids and Great Grandpa too 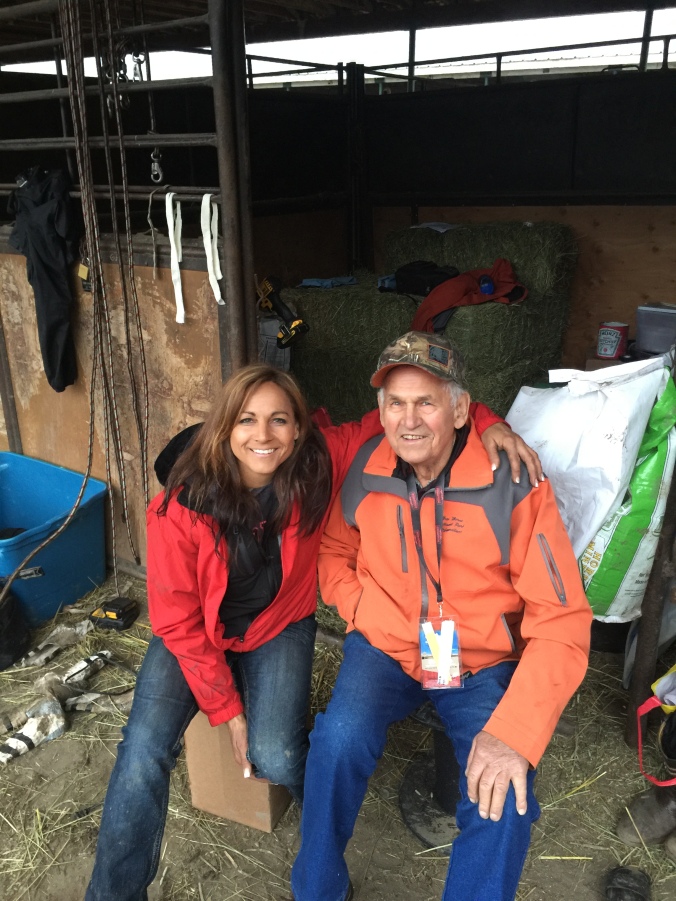 My dad and Me

I was tickled pink, to see my dad at the end of the barn tonight.  He’s looking pretty darn good for 83 years young.

Rick and Sue my Dad Sig, Cody and Allie

We managed a family photo with Cody and Allie too. Treasured memories.

P.S.Life is a great big canvas; throw all the paint on it you can.