Its been nice to have a couple of very low-key days before the races begin on Thursday.  As we near the end of the season, we have sent home some horses, so we only have 15 head in the barn to care for.  Normally throughout the summer, we carry up to 23 horses.  This a huge difference in training and care taking time. 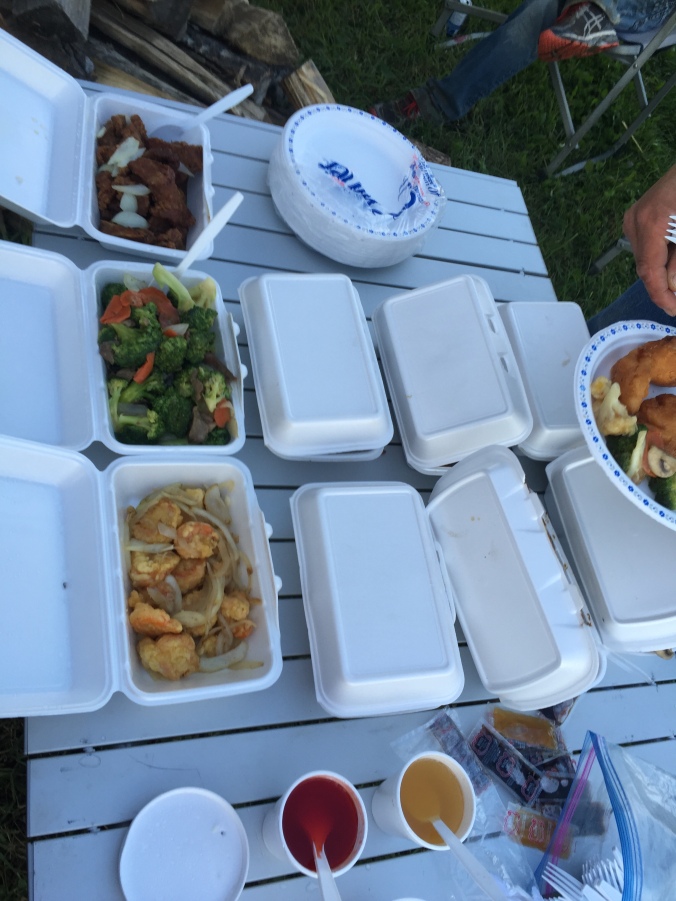 Last night we were treated to a wonderful dinner of Chinese Food back here at camp.  The best part was I didn’t have to cook.  Thanks to Mabel our sponsor from Henry’s Western Wear here in Rocky Mountain House for supplying our crew with this delicious meal. 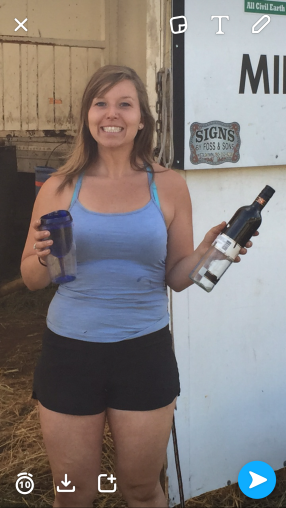 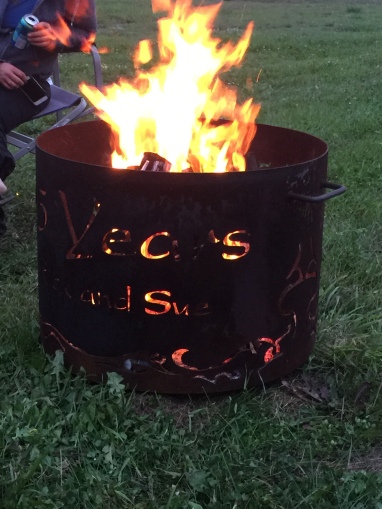 We enjoyed our meal around the camp fire and a glass of wine to relax with afterwards.

Bruce, our relative showed up this morning to camp with us for the weekend.  Bonnie, his wife didn’t make it as she has another venue to attend  elsewhere.  Rick, Bruce and I ventured into town for a few things in the afternoon.  We stopped in at the local bottle depot to drop of a few bags of recycles.  I just had to show the guys, because this is the neatest, tidiest and most efficient depot I have ever experienced.  They even have 2 machines that count the cans and bottles.  It’s very slick indeed.  Jill, the owner was on hand who I met last year, and she took us into the back to see how it works.  The guys were pretty impressed.  We continued on our way to Henry’s Western Wear, and the Grocery Store to pick up a few things for dinner.

Upon arriving back to camp, we found this bale of goodies on our door step.  A bale of shavings/bedding for the horses from the local Co-op store.  What a nice gesture that they do for all the drivers.  Every little bit helps, and we appreciate it so much.

Bruce loves to cook when camping, so he and I are partnering up to plan and prepare all the meals this week.  Tonight we did simple, making burgers, hot dogs and fries.  All done outside.  My trailer is staying clean.

I had someone ask about our horse Law.  I decided it would be good to share a little bit about him.  Laws papered name is First Law.  We often give our new horses nick names.  We purchased him from a trainer from the track.   Law was born on April 10 2005, so he is 11 years old.  He is our best Right Wheeler.  He only drives on the right and no other position.  He has a very “hot personality”.  He is a quirky powerhouse, super serious and starts hard when the horn blows every time.  He loves his job.   Law is the first horse to ever win the Calgary Stampede Equine Award and the World Professional Equine award in the same year. We were proud when it was announced that he won the Calgary Stampede award again this year.  Law has a buddy named Andy, a outriding horse and they always have to be together in the pens and in the barn.  They are hard to tell apart as they are both bays and have little markings to tell which one is which.

Its looking like our weather here in Rocky is going to stay sunny and warm throughout.  Woulnd’t that be a nice way to end the season?

P.S.  Too often we underestimate the power of a touch, a smile, a kind word, a listening ear, an honest compliment, or the smallest act of caring, all of which have the potential to turn a life around.

3 thoughts on “A Day In Rocky Montain House”