Today was another warm and wonderful day.  We had no scheduled appointments to attend.  Chores started a bit later than 7 AM.  We can tell that the 10 day marathon is coming to an end.  Everyone is getting tired from the very hectic pace that the Calgary Stampede puts on a person.  Don’t get me wrong, it is always good to be here, but very grueling at the same time.

I think the photo of Baby Ryker says it all.  Crazy hair and the stunned look.  It was our turn to cook breakfast for the Dorchester Crew and “Team 23” .  Bacon, eggs, pancakes and hash browns.  Our friend Keith and I felt like a piece of bacon after we were done with the hot griddle spattering the grease everywhere.  We do the cooking right at the barn.  It works out pretty good.

After breakfast, I headed to the trailer to do a few things.  While there, my eyes were getting heavy.  I knew it was time to have a nap.  And that is just what I did.  It felt good to rest for  2 1/2 hours.

These are the hooves of our horse named Cowboy.  He has been a bit lame, so we have not used him here at the Stampede.  Our farrier has been working on him to help him with his issues.  We hopefully can use him at the next show up in Bonnyville, Alberta.

Rick and Ryker were taking some time to just sit and enjoy some quiet time before the races.  He is one busy little boy. 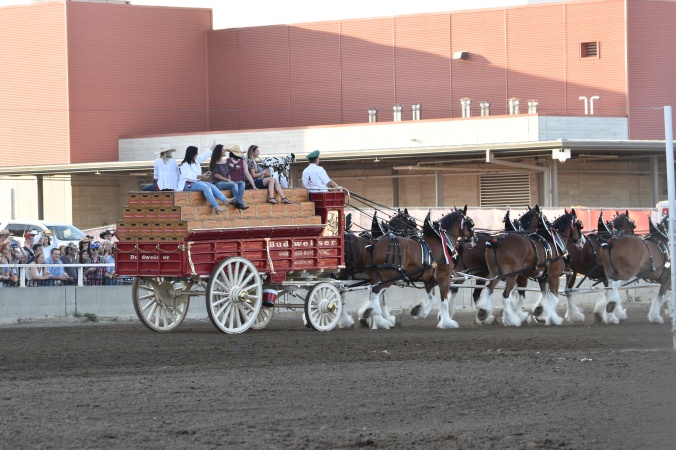 After every two heats,  they harrow the track for the next 2 races.  During this time, they have some quick activities to keep the crowd occupied.  This big hitch of eight big draft horses parades into the infield to show their stuff.  It is a real crowd pleaser for all that attend the evening performance.

When I’m tending to the outriding horses for the evening performance,  I often think back to the days when Rick and I were dating.  I look at all the young outriders and their girlfriends/young wives and think, “I was there once.”  It seems like just yesterday.  In this photo,  Rick is second from the right, retired Chuckwagon Driver and outrider, Jerry Bremner in on the far right.  Jim Nevada and Jim Sheilds are also in the photograph.  Back then, the Chuckwagon Driver and his outriders wore the same color shirt that they chose or the sponsor purchased.

Today the outriders wear color coded jackets that match the drivers.  Barrel 1 wears white, barrel 2 is red, barrel 3 is black and 4 is yellow. 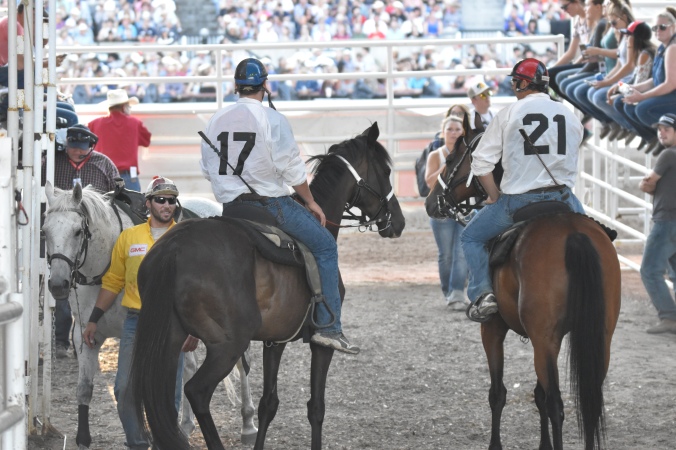 Tonight Rick was off the four barrel.  He hooked Spirit on the Left Lead, Speedy on the Right, Jim on the Left Wheel and Bacardi on the Right.  When the horn sounded,  all the wagons had a decent start to the race.  As I was taking some photos I noticed my hubby fishing for lines.  What does that mean you say?  Well he accidentally dropped a line or two while completing the turning of the top barrel.  He managed to scoop them up into his hands and keep going.  He did a great job. 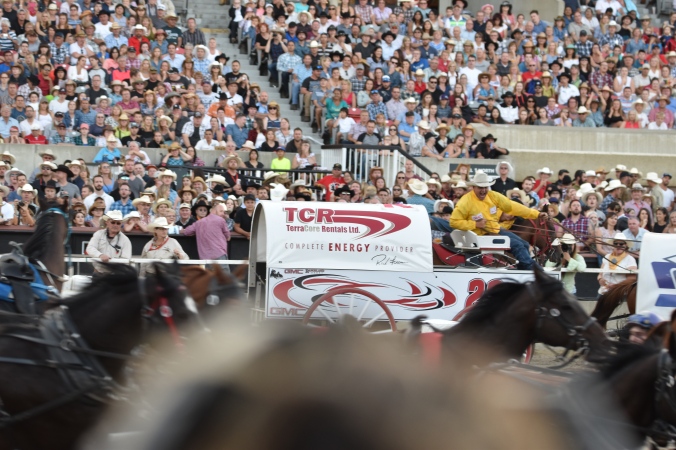 When he got onto the track, he was 4 wide, so he decided to pull and go to the rail.  At the finish line, it was quite exciting as cousin Troy and Rick were dueling it out to the finish line.  Rick’s time clocked in at 1:13.09 good for 18th on the day and Troy’s was a 1:13.06.  Oh so close.   We ended up 18th on the day, and 14th in the aggregate. Troy had a good clean run that put him into the semi finals tomorrow.  We will be cheering for him.

P.S.  There are only the pursued, the pursuing, the busy and the tired.