I was very slow and sluggish this morning, as were a few others. The reason being is today is Allie’s birthday, so Team 23 and a few others decided to go out to the local Ralph’s Pub last night to celebrate her coming of 20! It was late when we arrived there, as we had to care for the horses and make sure they were all tucked away with their evening mash, fluffy straw and fresh water before heading on out. Rick and I two-stepped around the floor a few times and visited with some of the patrons. The kids were having lots of fun when Rick and I exited around 12:30. We had to get to bed for our early morning schedule. 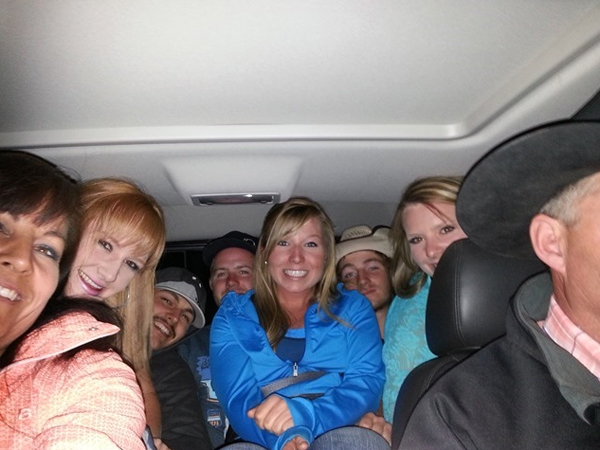 Chores took a bit longer this morning but we got them done in time for us to hook up an outfit for practice. The weather was cool most of the day and we even got a bit of rain. Nothing to worry about, as the ground is so dry here that it just soaks up any moisture. We’ve had such a mix of temperatures since we have been here. You just never know from one day to the next so you have to be prepared with all kinds of clothing.

After making the crew a yummy bacon and egger cheese bun, this chick had had it and snuck off to bed for a nap. But then I wasn’t the only one with that idea, as everyone else did too! This was all okay, as we had an early race day with the first heat running at 2:15. When this takes place it just mixes our daily routine around somewhat.

With 12 heats at this venue, we get all the horses that are going washed, brushed, wrapped and harnessed, and then we are able to scoot over to watch a few of the first races. Being in the 11th heat allows us to do this. It is really a treat, especially here in Medicine Hat, because we are parked right on the 3rd and 4th turn. At some of the tracks, we are too far away to see any of the races so are only able to listen on the Sirius Satellite Channel 80 live broadcast. 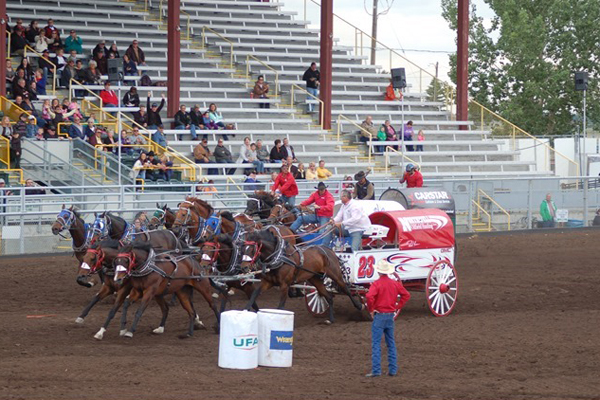 Once again, Rick hooked Air on Left Lead, Ranger on Right Lead, Duba on Left Wheel and Ernie on Right Wheel. This time around Duba did not rear up, thank goodness. Coming off of barrel 1, the start was a bit slower than we would have liked. Layne on 2 and Kelly on 3 came out a bit ahead of us but we were still able to maintain the rail. It was tight, as Kelly was coming down on both Layne and Rick wanting to take the rail. At the finish line, our Team crossed first, giving us a time of 1:02.28, 11th on the day and 12th in the aggregate. Bingo and Stadium were twinned up with Chanse Vigen and Dustin Gorst today, and they all did their job perfectly. Two awesome outriders and two awesome outriding horses. Congratulations to Colt Cosgrave on a speedy day money run. After three days of racing we get re-seeded in a redraw tomorrow in a new heat.  The top three aggregate drivers, John Walters, Obrey Motowylo and Evan Salmond, have earned a spot in the final dash to vie for the Medicine Hat title.

We had the cutest little girl receive our mini chuckwagon giveaway today. We are thrilled when they come back to meet us. She was pretty shy but loved meeting Ace, one of our horses.

Example is not the main thing in influencing others. It is the only thing.