Afternoon Races!  Some love it…………..and some don’t.  None the less, that is what they are here in Medicine Hat.

It was like living on a boat throughout the night, as the wind blew hard and was still blowing this morning and into the day.  The rain teased us a bit early on, but then cleared off and the sun came out by noon time. 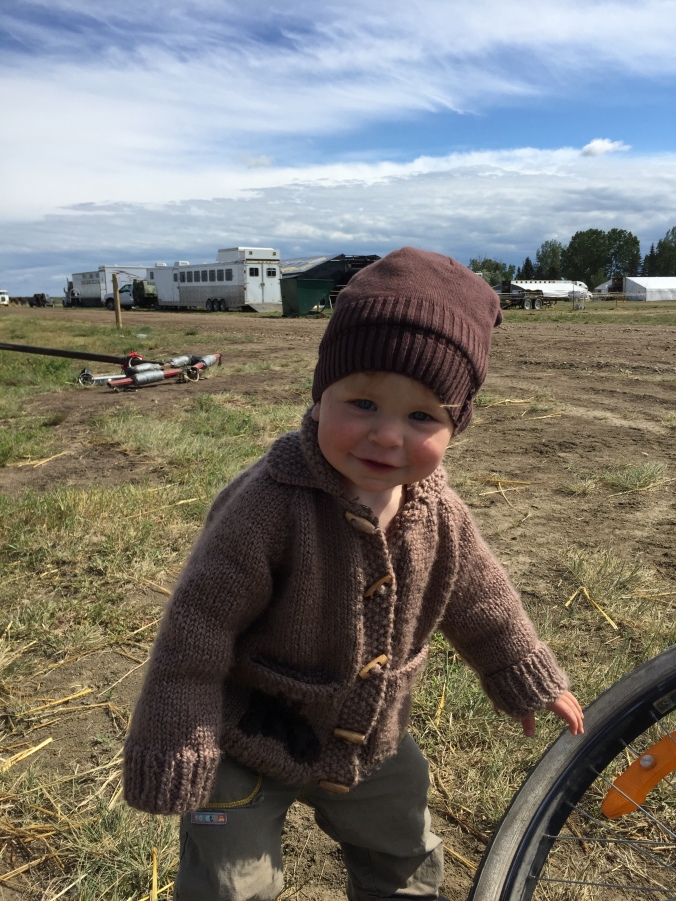 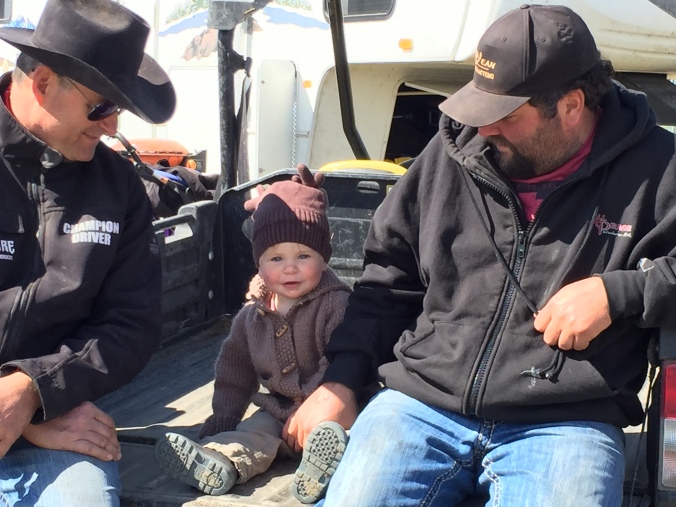 A “Rose” between 2 thorns

As the morning was short before races, we stopped over at the neighbor Salmond Camp.  Evan and Adrienne, have their little 1 year old Rose.  What a cutie she is.  We enjoyed watching her just enjoying life down at her level.  Little Rose won’t be the little one for long, as Adrienne is expecting their second bundle of love in July after the Calgary Stampede. 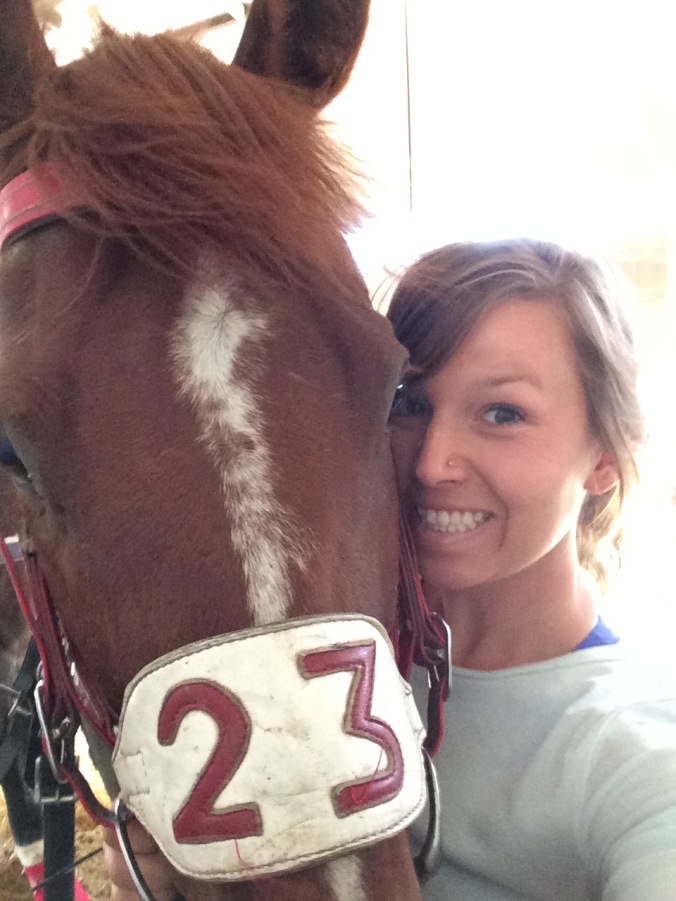 We are very happy to have hard working Kim on our Team 23.  Kim is like Ricks shadow when it comes to all our horses.  She is a very good care taker of all of our equine athletes in general.  A huge part of looking after the horses is keeping them sound.  This means keeping care of their legs, wrap them if need be. This is Kim’s second season with us. 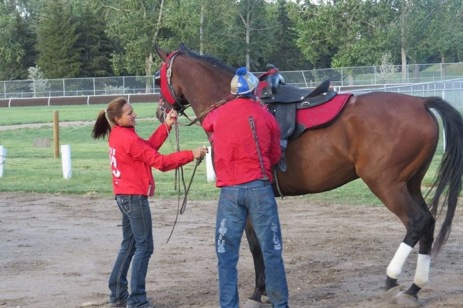 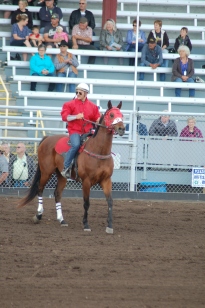 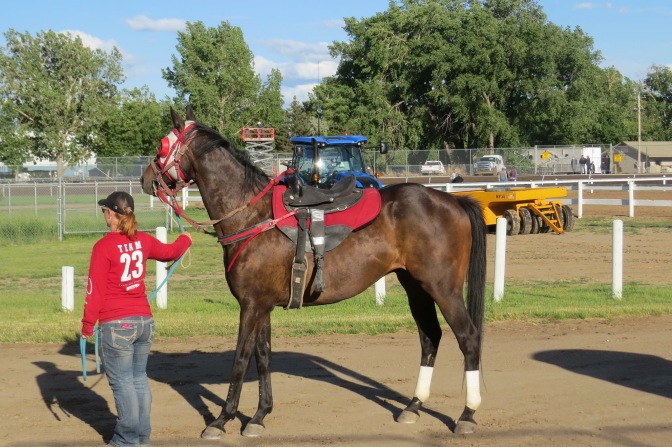 It takes a team to get to the races, and we are proud to have so many on “Team 23”.  And even though there are a few of us at the races, there are many at home helping out on the Ranch.  And we thank all of you for that. 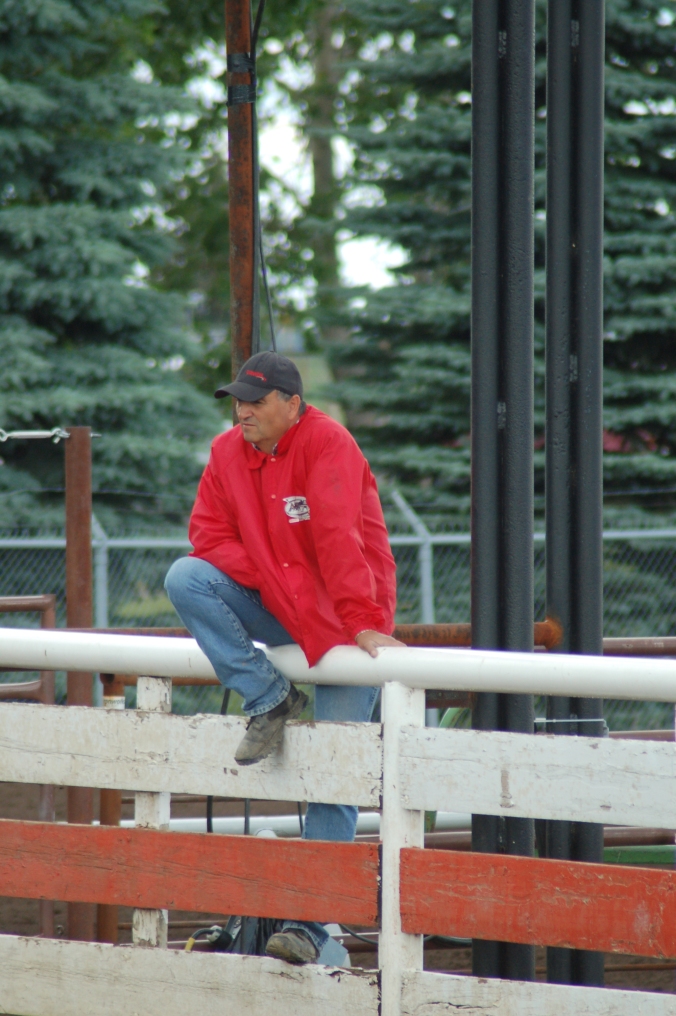 When there are only 3 wagons to a heat, it gives some of the drivers a chance to come to the track to watch some of the races before its their turn.  Here Luke sits a top the fence with  a birds eye view. 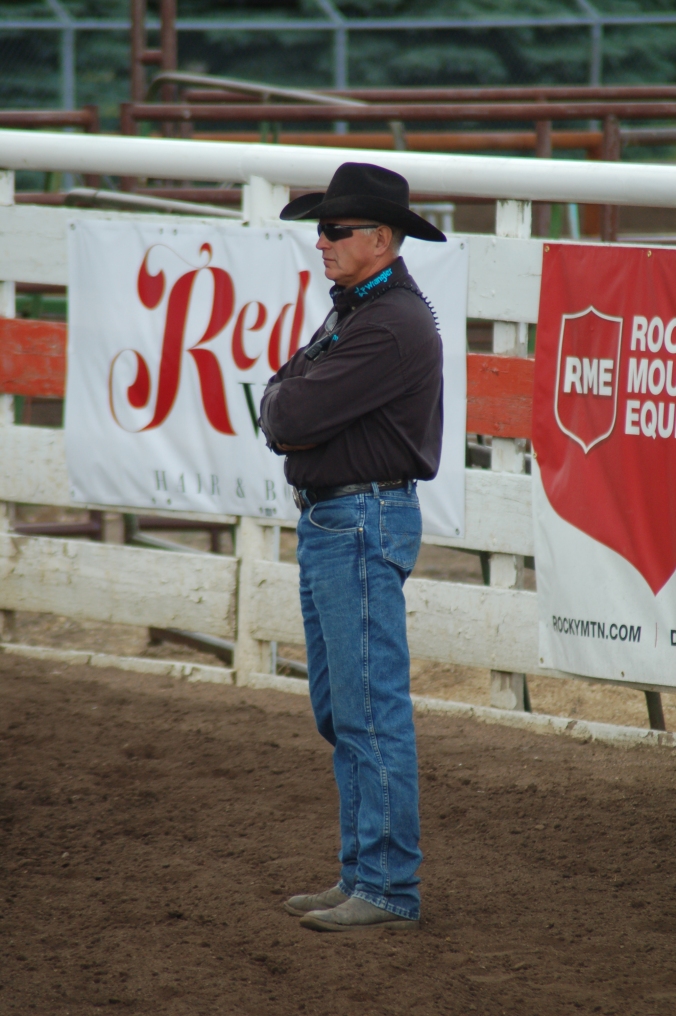 Buddy has now got one of the best jobs around.  As he had his share of chuckwagon racing for 40 plus years, he now gets to travel the roads and be the World Professional Chuckwagon Associations Arena Director.  The best part of this, is that his boy Kurt, and son in law Vern Nolin (Lisa Bensmiller) both competitors on the circuit, so he gets to cheer them on from the sidelines.  We are happy to have him doing his job, as when there are mishaps, as in yesterday, he knows exactly what to do and jumps right in to do it. 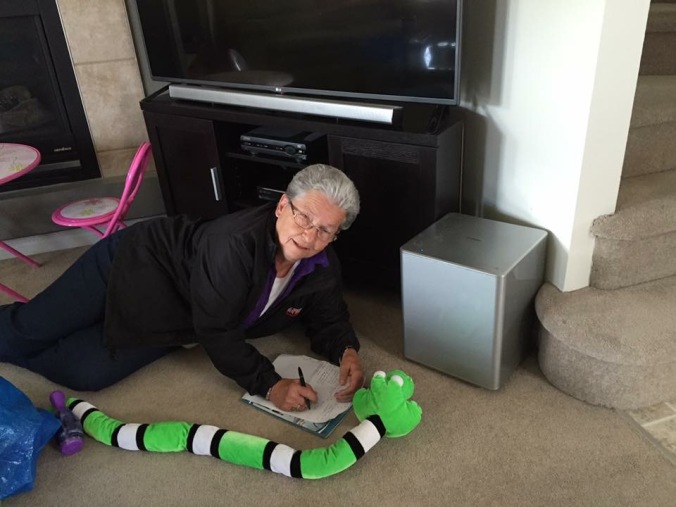 Bonnie, the longest and most faithful Chuckwagon Follower and Fan

Did you know, that you can listen to the races live on Sirius XM 147?  That’s right!  And it is good, because there are so many faithful followers that are not able to get out to the different venues to watch it live.  One of Rick Fraser and “Team 23” and Troy Dorchester’s most faithful, dedicated and  longest listening  fan is Bonnie of Wetaskiwin Alberta.  She never missses a race come Hell or High Water.  She subscribed to Sirius just for this.  As you can see, today, on Fathers day she was glued to the radio so she wouldn’t miss a thing.  Bonnie also has all, and I mean ALL the times written down from years ago when relatives Grampa Tommy Dorchester, Dallas Dorchester and Denny Dorchester were racing, and continues to write all the times down just for her reference.  And if I remember correctly, her mom did the same thing when she was alive.

Today at the races was so much better than yesterday.  Here in Medicine Hat, we’ve had our fair share of issues.  But having said that, “Team 23” is learning and growing, and figuring things out for the Venues ahead.  I believe it will all come together in due time.

Tonight, Ricky hooked Air, Ranger, Keenan and Vegas.  Chanse held leaders with Stadium, and Cole thew the stove with Corn Whisky.  Well when that horn sounded, they were rockin!  They all dug in and Rick made a nice turn at the top of 2, coming around nicely to take off hard to get the rail from the competitor on 1.  And then they few around the track to set a time of 1:02.30 good for 11 on the day.  Cody did really good as well, posting a time of 1:02.57 just behind is dad for 12th on the day.  Rick and Cody ended up 27th and 32nd in the show respectively.  Onward and upward.

A congrats to Team Doug Irvine for winning the Championship final in today’s race, beating out Jason Glass and Kurt Bensmiller. 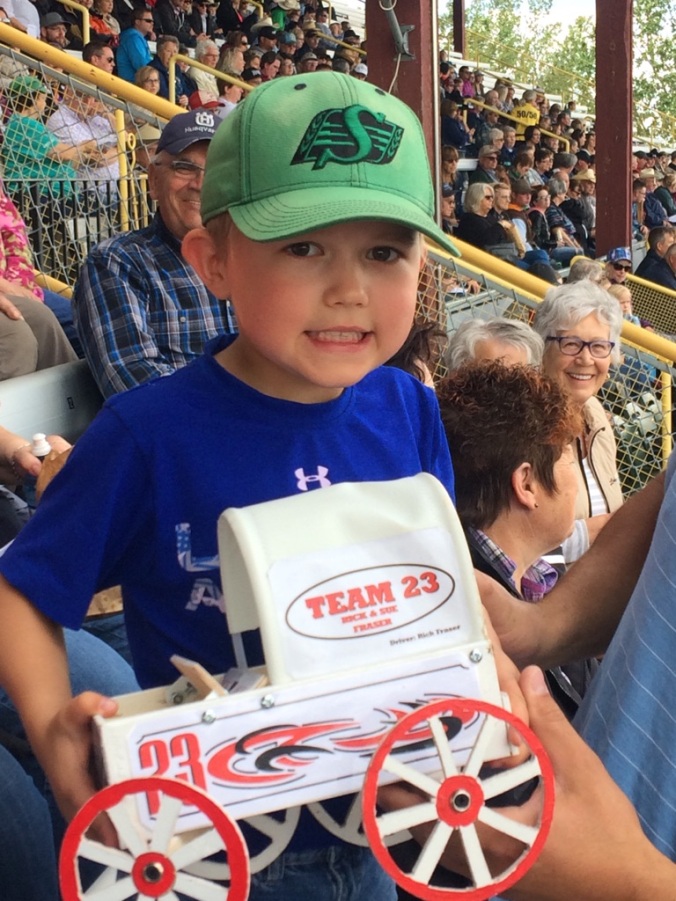 This little fella, was the last recipient of the Medicine Hat Chuckwagon Races to win our little mini giveaway.  Come on out this summer to any of our venues to have a chance to receive one of these keepsakes. 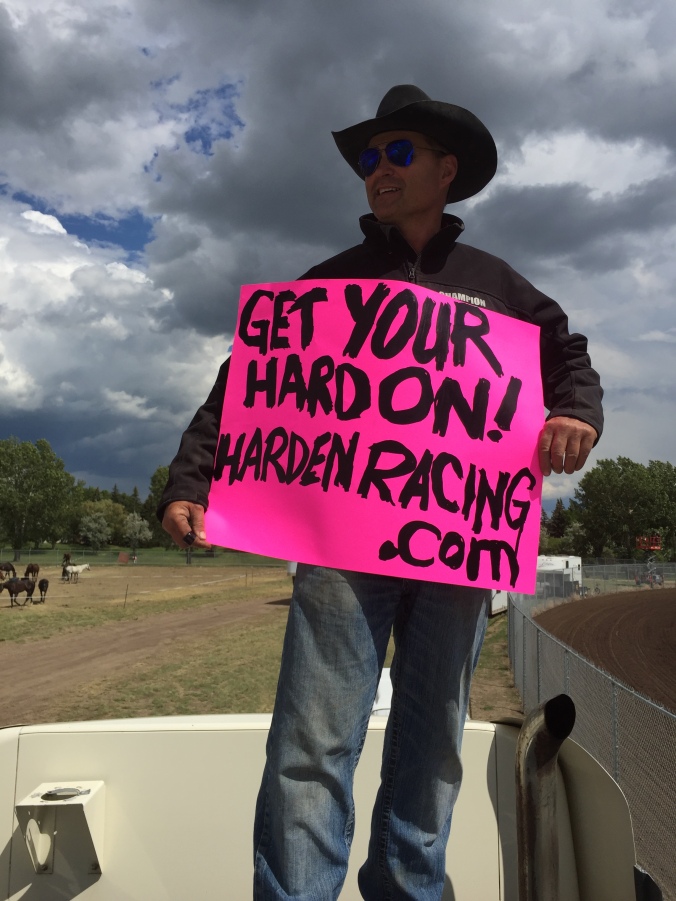 When you travel the road for 3 months of the year, you gotta have a little fun too.  My hubby has no shortage of that, when it comes to tricks and pranks.  Because we were seated in the 2nd heat today, we had some time to watch all the other races go around.  Being parked on the 3rd and 4rh turn, we had the best seats in the house.  Well, Rick had to make up a little sign for his competitor and friend, Chad Harden for all to see when the wagons ran on by.  I think he was noticed!

P.S.  Life isn’t a matter of milestones.  But of moments. 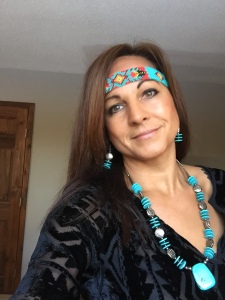