It rained throughout the night and a bit into this morning, then it cleared off, and the sun came out to dry up some of the land.  It was all good, until about 3 pm, then a wind and rain storm flew in from the north.  It didn’t last too long, and then it fled east. 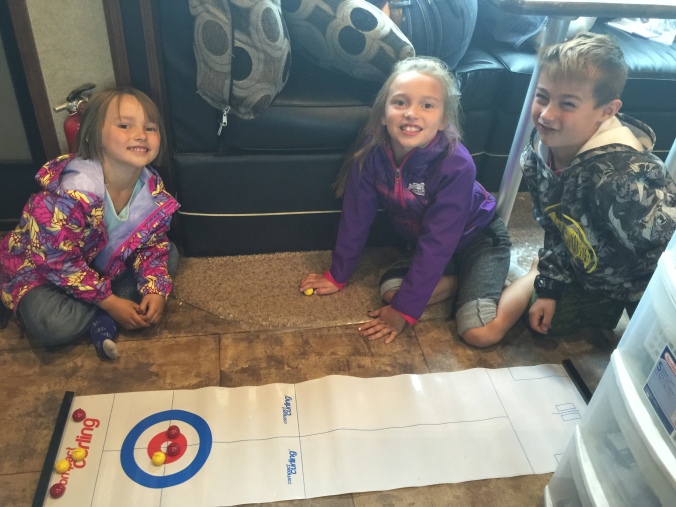 My morning was spent in the trailer doing a few things, and more importantly playing with Coy.  Our grandson  arrived the day before to spend the weekend with us.  We were excited to see each other as it had been awhile since we were at home.  The Chuckwagon kids love to get together to play, so Coy invited the Gorst girls to come on over. 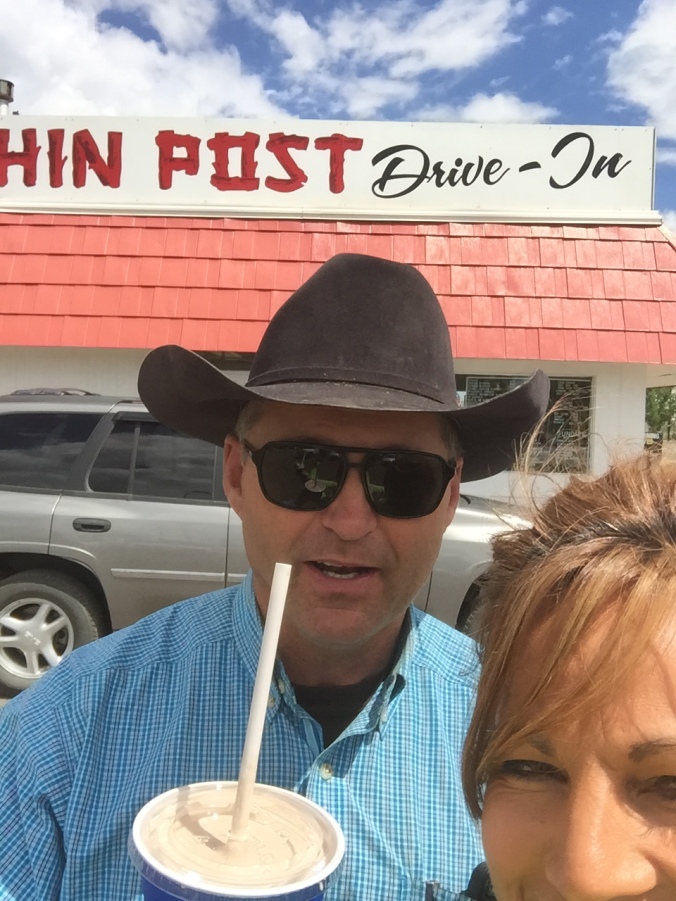 The grounds at our venues, on race days, become very quiet in the early afternoon.  It can be pretty hard to find any of the drivers and families outside the camps.  Most have a scheduled afternoon nap.  As Rick had his shut-eye a bit early, and Coy went swimming with some of the other families,  Rick and I doddled into town on a date!  We went for propane, diesel for the truck and then ended up at The Hitchen Post, the best little burger and ice cream joint south of Calgary.  We always take time here and there, to be just the two of us. 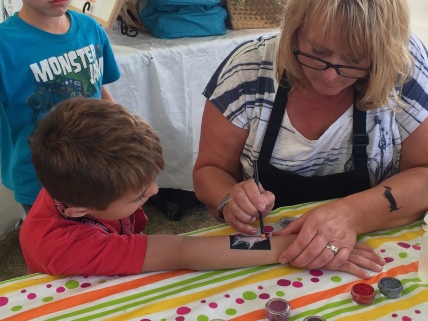 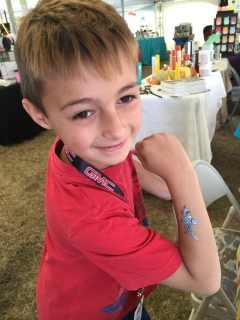 After we all returned, Coy and I went on a little date over to the other side of the grounds where some vendors are set up.  Coy was excited to get a sparkle tattoo of a shark on his arm. 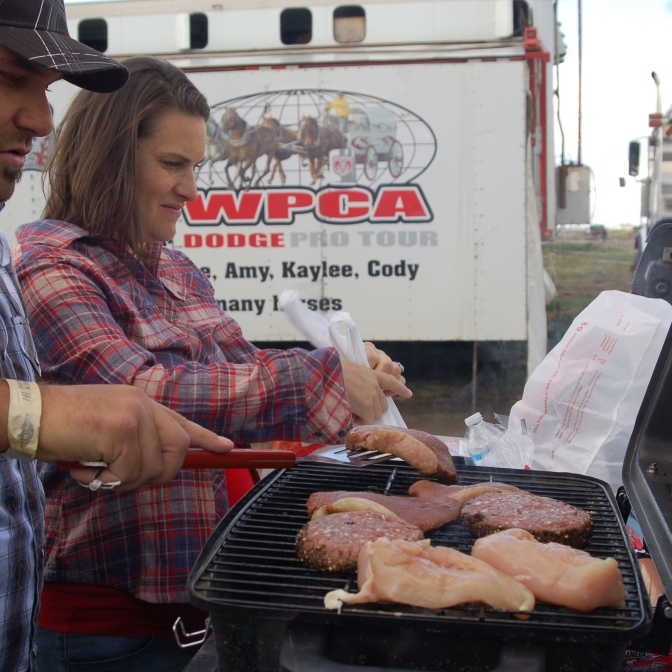 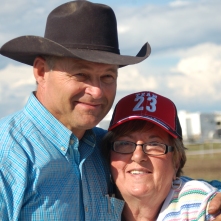 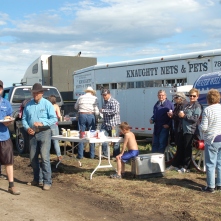 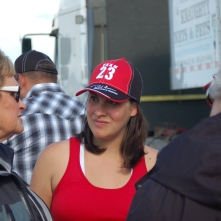 The day didn’t take long to fly by, and before we knew it, it was chore time again.  Our sponsors from Peter Niemans Water Well Drilling arrived with a tail gate party for         “Team 23”.  What a treat that is for me.  I didn’t have to fret over what was going to be for dinner.  Thanks to Doug and Company, all was totally enjoyed. 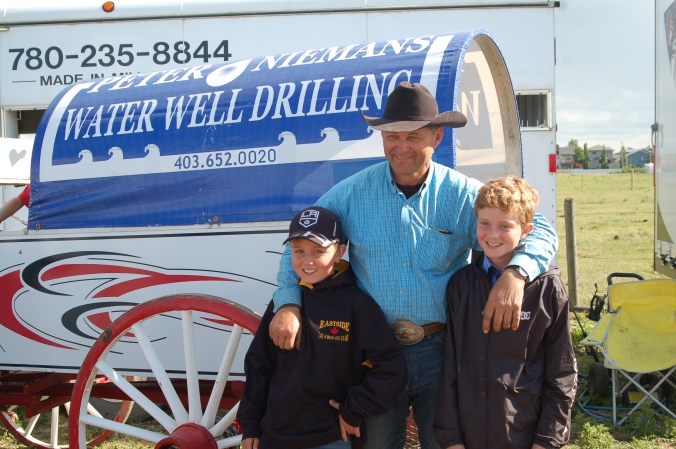 One of the best things in our sport, is having folks come by to the back of the barns.  Its equivalent to being down in the pits at Nascar, or going into the dressing rooms of the teams in the NHL.  That is where all the action is at. 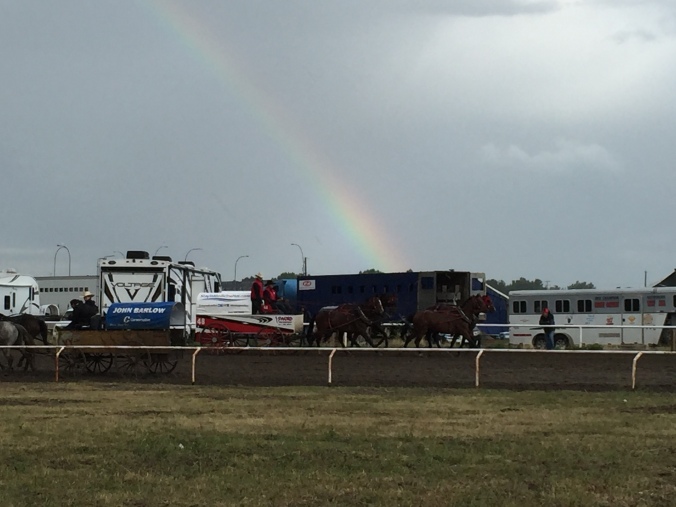 When Cody came out to race,  the rain began to fall.  Not a lot, but gently.  And lo and behold, a beautiful rainbow appeared in the sky.  I couldn’t resist getting a shot of him and his wagon under the rainbow.  Cody ran a good race, but unfortunately, his outrider didn’t. He had a tough time and didn’t make it around the barrel, causing a 2 second penalty.  Just plain tough luck. 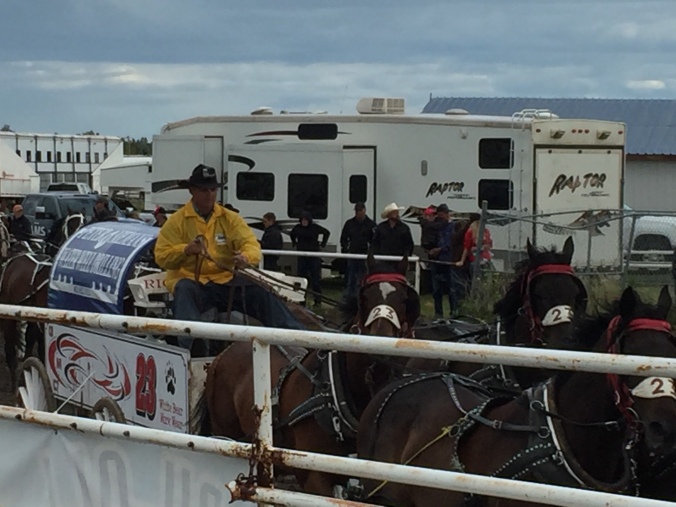 Concentrating coming into the barrels

Just as Ricks heat was pulling in, the rain had ceased, but the mud did not.   Rick came off the 4 barrel tonight, and boy did he fly!  Fast enough to get ahead of his competitors to take the rail coming into the first turn.  I was elated!  Law (LW), Nicke (LL) Speedy (RL) and Trick (RW) ran hard and fast.  Cole rode Andy and Shawn rode Corn Whiskey.  We were both very happy how both the boys worked things out tonight.  penalty free and a Day Money Run!!!  So Excited for that!!! Team 23 posted a 1:17.55. with the 2nd day money winner posting a 1:19.54.  A 2 second spread.  This was a real uplifter for all of us. 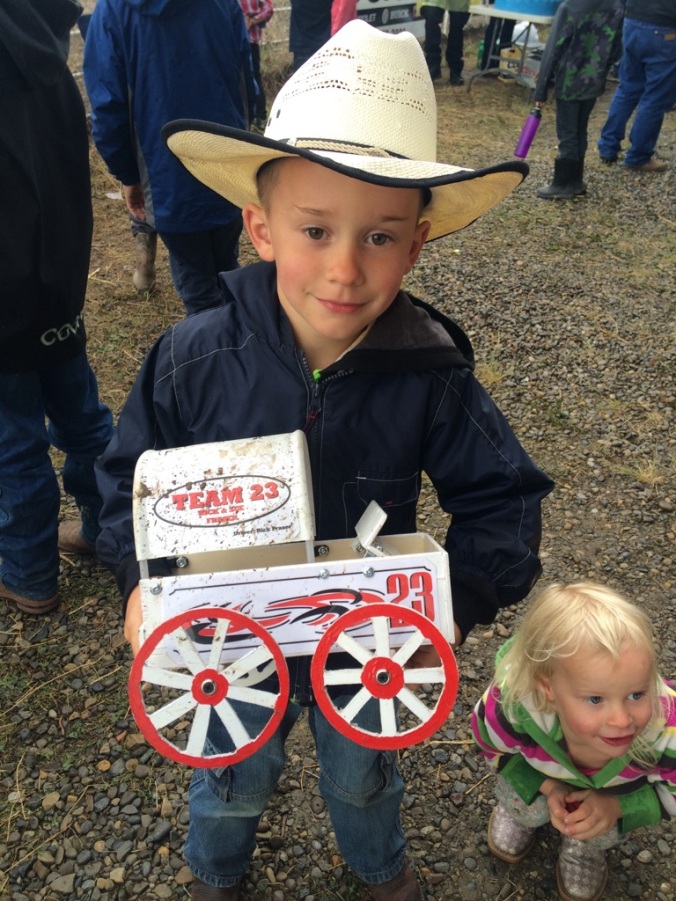 I just love these little ones smiles, when they get to keep the mini Chuckwagon giveaway.

Some shots of around the barn. 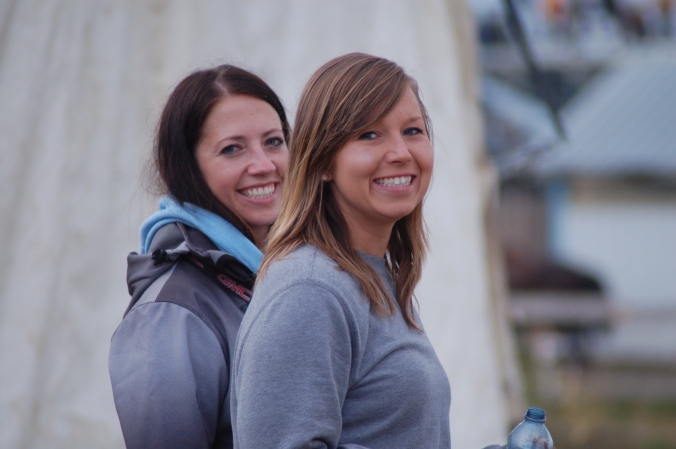 Candice and Kim with Smiles All Around

And as I’ve always said, it takes a crew to make things happen.  And “Team 23” is made of many.  Here, we have Candice and Kim, who both look after the horses to the top of their ability and are extremely proud to call our horses their family.  We appreciate all that they do. 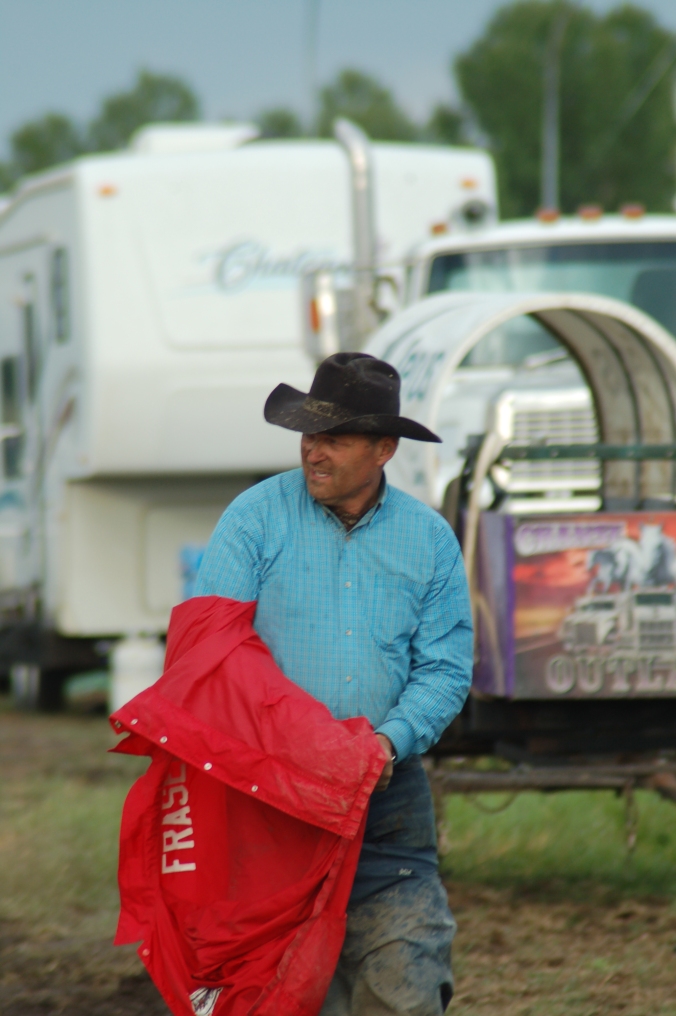 The Captain of the Ship

When Rick returns from our heat, he quickly gets our horses settled in, then take off next door to give fellow driver Mike Vigen a hand with his horses. 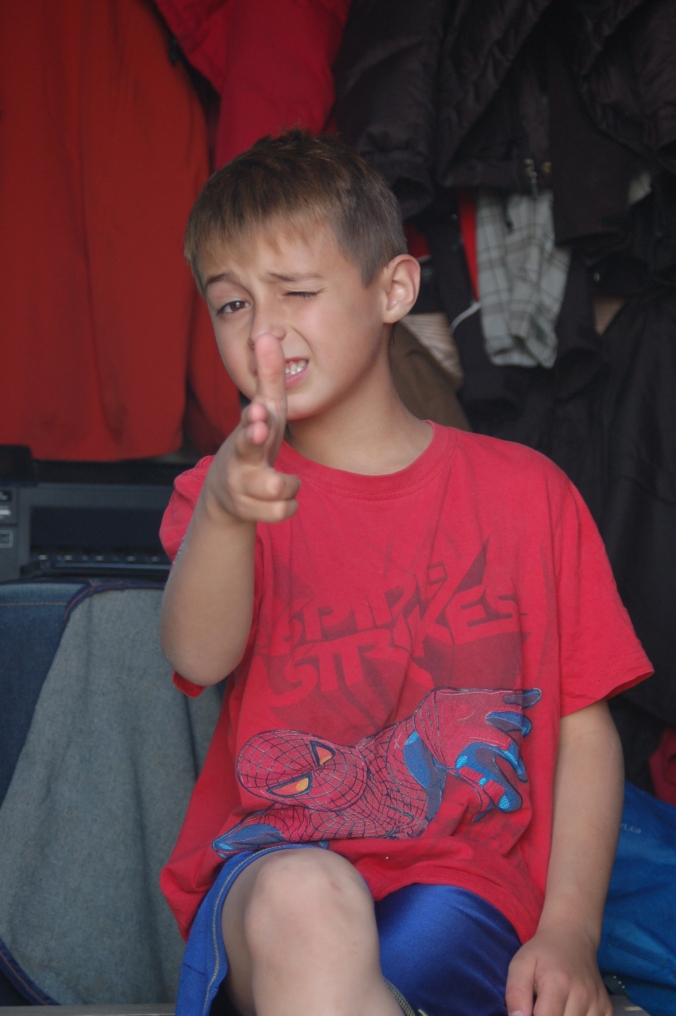 So onward and upward from here.  Tomorrow is an early race day, beginning at 4:00pm.   Then from here, we are off to the town of Ponoka for its 6 day Stampede.  Come on out if you can and stop by to say hello.

P.S. I have learned this at least by my experiments: That if one advances confidently in the direction of his dreams, and endeavors to live the life which he has imagined, he will meet with a success unexpected in common hours. 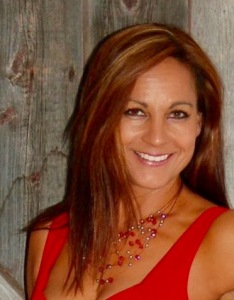