A beautiful morning it was, here in High River Alberta.  I went for a morning jog in the area, and it was so peaceful and quiet at 6 AM.  Rick fed oats at 6 and continued on with chores with the crew at 7 AM.  The weather report said there may be rain later in the day, but our area was spared. 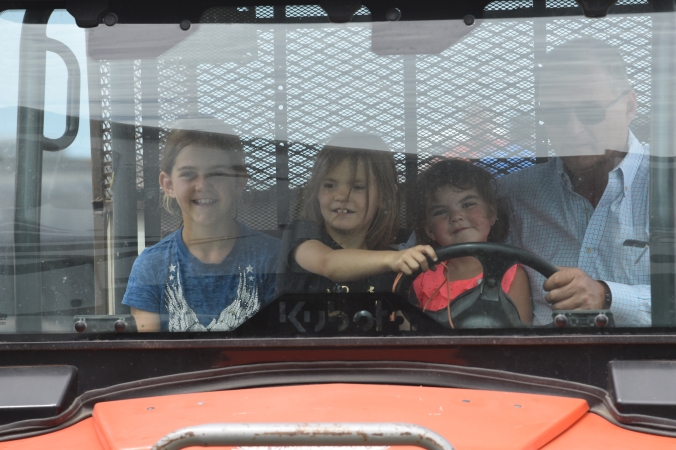 All the kids from the other camps don’t take long to find out where we are at each stop on the tour, as Rick is labeled as the Candy Man.  We love to treat them with all kinds of sweets and treats.  They come to visit and Rick loves to take them for kubota rides. 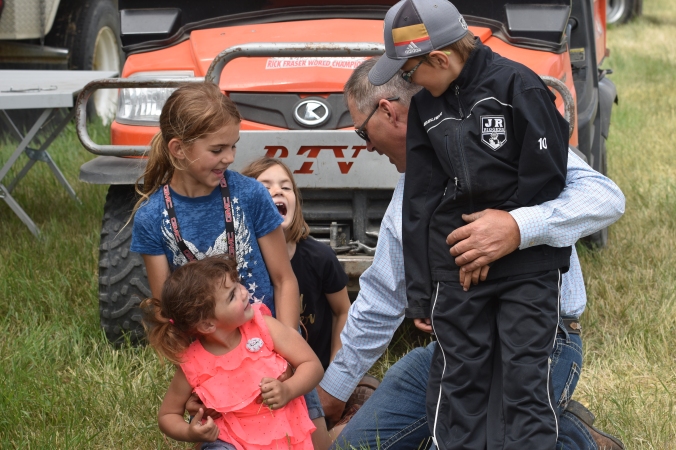 Rick also got some of them learning how to two-step up in the liner.  However, the boys and girls are a bit young, and having to get close to the girls just isn’t so cool at this age in life.  One day that will definitely change.

After lunch, Rick had a few of the young fellas that are potential outriders,  come by and he gave them a few lessons on how to run, jump and mount an outriding horse.

Back in the day, Rick was one of the best, and has many belt buckles to show for it.  He has a passion to help these young fellas learn, to keep our chuckwagon sport alive. 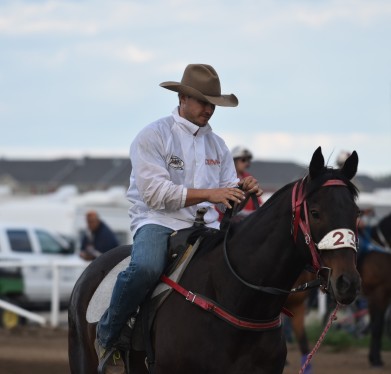 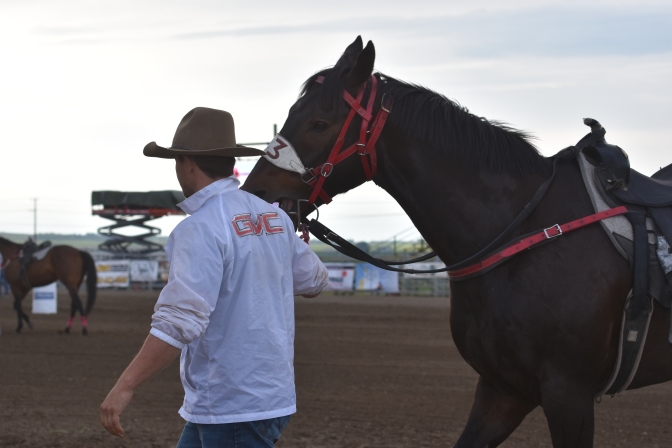 Every show, we hope to keep the same outriders, but this is not always the case depending on who we get hooked with.  As Chance Flad and Rory Gervais ride for Doug Irvine, we lost them for this show as we are hooked in the same heat as Doug.  We hired Quaid Tournier, and Chanse Vigen asked to ride behind us just one more time before Rick hangs up the lines.  Chanse has his own outfit to race so we were thrilled that he was available.  Chanse is an amazing athlete all around.  We are thankful to have him on our team this High River Show.

My job for years, has been to prepare the outriding horses for the evening race, and take them to the track for the outriders to ride. 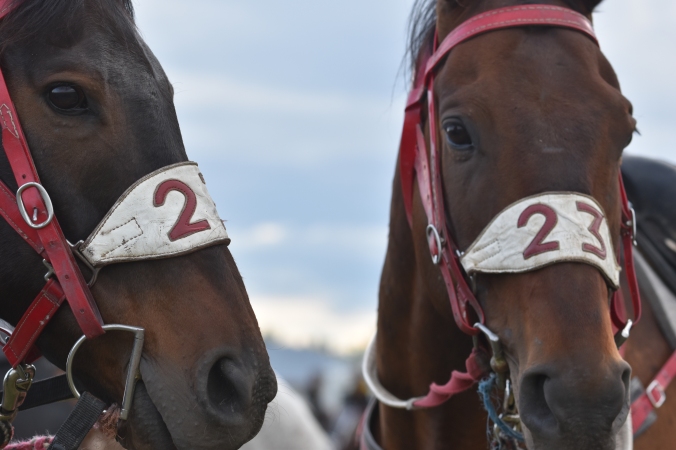 Two of The Best

Tonight, Ed and Andy were our horses on duty.  Quiad held the leaders with Ed and Chanse threw the stove with Andy.  These are such quiet easy horses to tend to while waiting for our heat.  They are well-mannered and that is just how I like it.

Our team tonight was Spirit on the Left Lead, Ranger on the Right.  Cowboy on the Left Wheel and Jim on the Right.  The horn sounded and all 4 wagons charged forward.  Rick had a nice barrel turn on the top and bottom and took the lead onto the track.  He maintained first place all the way around, capturing a day money run in a time of 1:17.55 and sitting third in the average. 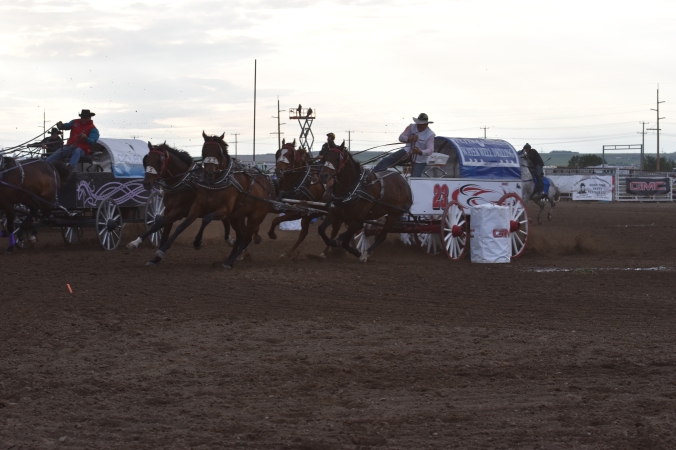 We are so proud of how our horses have been performing.  It is totally a group effort when it comes to keeping our horses sound, fit, healthy, fed and watered.  There are so many others that help us maintain their high performance, and we thank you all.

It is always a great feeling when you know you’ve crossed the finish line first, only to find out that the day money run is yours.

P.S. Because that’s what kindess is.  It’s not doing something for someone else because they can’t, but because you can.  Andrew Iskander

Before we left for Medicine Hat on Monday,  we loaded our grain bin on our truck full of oats to keep us going for another couple of weeks.  When Rick bought the Peterbilt, he added on another sleeper from the scrap yard and made it into an oat bin.  It works slick as a whistle as we have 2 RV discharge spouts on the bottom on each side of the container.

High in the Sky

The journey to High River, AB was uneventful.  For me in the Frieghtliner, I drive in silence most of the time.   I rarely turn on the radio.  I normally just drive along and think to myself.  Or I make a few phone calls to catch up with the kids, relatives and friends.

While the crew set up camp, the horses enjoyed a nice warm relaxing rest in the bright warm sunshine.  Our liner/barn, has hydraulic sides that are operated with a generator to fold them in and out when at each destination.  Back in 2005 was the first year we had this, and I tell you, we sure have appreciated using it.  It just makes this go a little bit quicker. 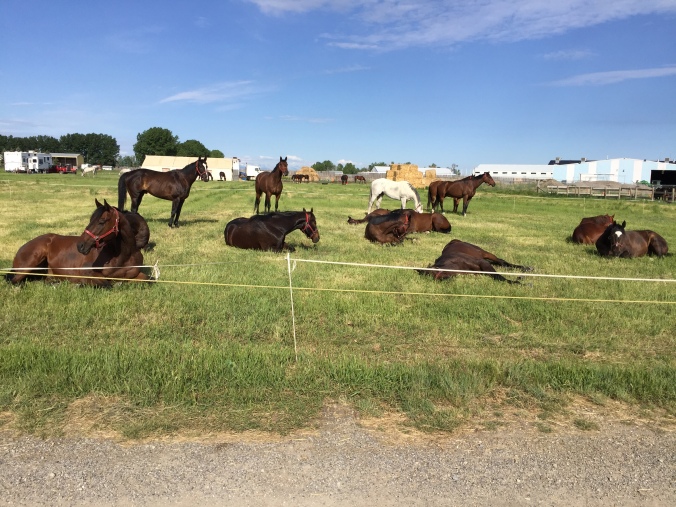 And once we were finished, camp Dorchester and “Team 23” enjoyed a few beverages, pizza and stories to boot.

As we had a few days off before the show started, many wagons utilize the morning track times to run an outfit.  Cousin Troy Dorchester had a team needing a blow, so Rick jumped in to lend a hand.

When in this southern part of the province, we always enjoy heading out west to the Longview country.  It is so beautiful out there with the rolling lush green hills and the big blue and white mountains in the distance.  We ventured out to our friends, John Scott to show our barn hands around.  It is such a unique Ranch, as they have filmed many fun and exciting movies on the place.

I was pretty happy with the photos I had taken.  The place just had so much to offer in the way of landscape, movie sets, animals, buildings and so much more.

Did you ever know there were white buffalos?  I sure did not.  Well there were a few out in the pasture out on the Ranch.  They were pretty unique looking. 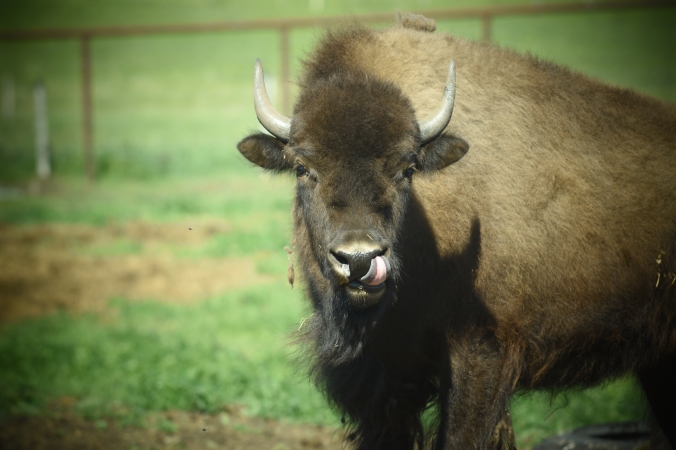 The regular hairy brown buffalo’s were there too!  Rick was pretty worried I was getting just a little bit to close to them while taking their photo.  He had his hand on the wheel and his foot on the gas just in case they made a move.

While I was out early this morning on my bike for my “Me” time, I came across this lovely rock.  I thought that this love sign was pretty cool.  It was meant for me.

As race time neared, last-minute things had to get done. With little time to spare, we worked together and scrubbed the sponsor tarp shiny, bright and clean.  Nothing a little bit of elbow grease can’t fix.

Heading to the Track

Our outriders tonight, were Quiad Tournier on Stadium, holding the leaders and Chanse Vigen throwing the stove on Ice.  It was so good to have Chanse back for just one more time before we retire, as he very seldom rides anymore, because he has his own team of horses to drive. 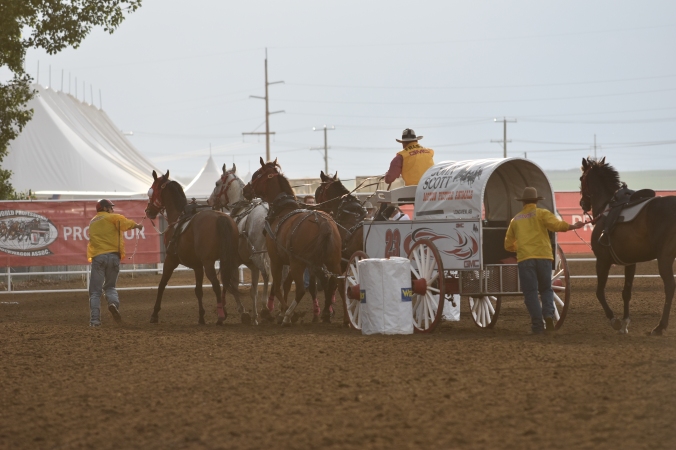 Coming off the four barrel, carrying the John Scott Motion Picture Animals Tarp, Rick had Louie on the Left Lead, Nickle on the Right Lead.  Spin on the Left Wheel, and Sporty on the Right Wheel.  The team had a great start at the horn.  The barrels were left standing and they hunted the track and gained some amazing speed.  They were pretty fast and posted a 1:18.43 on the day, which was good enough for a day money run. 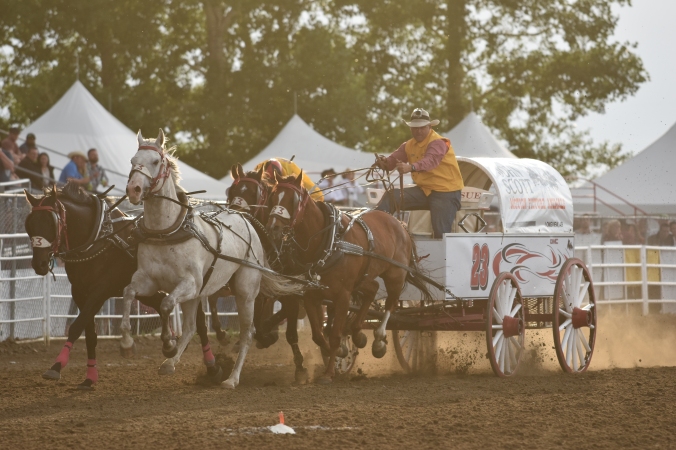 We were all pretty excited as we knew Rick had driven very well, and the horses performed to the best of their ability. 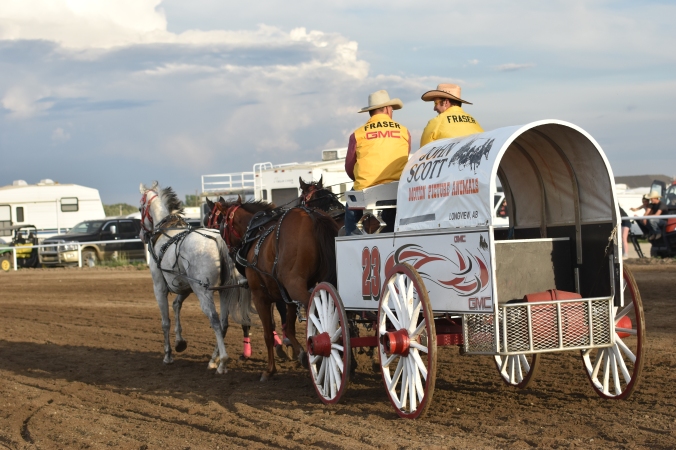 Back to the Barns

However, nothing is official until the a few hours after the last race is finished.  The judges need to review each and every heat, to be sure that all things went accordingly.  And sometimes, things have been seen, and a penalty will be assessed.  Apparently, our heat was reviewed, and the judges felt it was tight on the first turn between chuckwagons.  “Team 23” was assessed with 2 seconds inference penalty, and our time had changed which brought us down to 11th on the day.  Despite that decision, we couldn’t be happier with how fast the horses ran, 2 to 3 wide around the track.  Amazing! 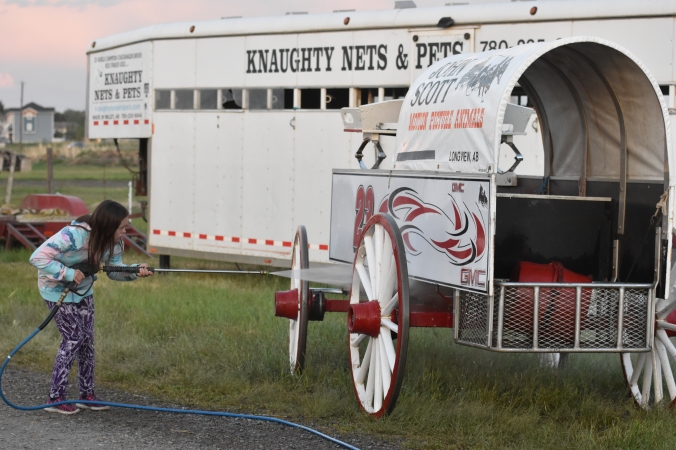 The chores aren’t quite done until the Chukwagon gets washed, and Rick’s little buddy, Dace sure did a pretty good job getting his clean.  What a great little helper she is. 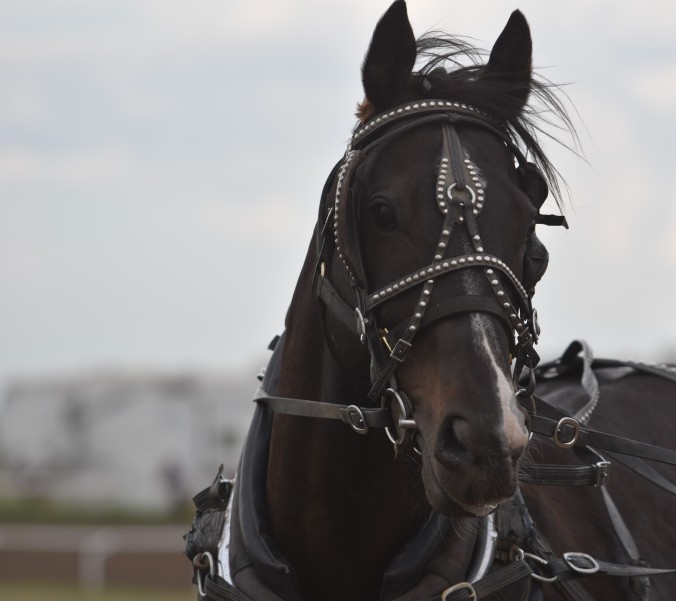 P.S.  Resolve to be tender with the young, compassionate with the aged, sympathetic with the striving, and tolerant with the weak and the wrong.  Sometime in your life you will have been all of these.  Dr. Robert H. Goddard