The week has gone by fast, as they always do when we’re on the road.  From week to week, and traveling from city to city, things tend be become a blur at times.  Don’t get me wrong, I am enjoying the life we’re living, it just seems as you get older, time passes just that much faster.  I think many of you can agree with me on this one.

Today, things went by fast as we had an early race day beginning at 2 PM.  I helped with chores and got the morning off from making breakfast.  The ladies under the grandstand are open for business all week in the mornings,  so I treated Rick to a Fathers Day breakfast (but it was really for me to take a break haha)  Smart thinking on my part hey? 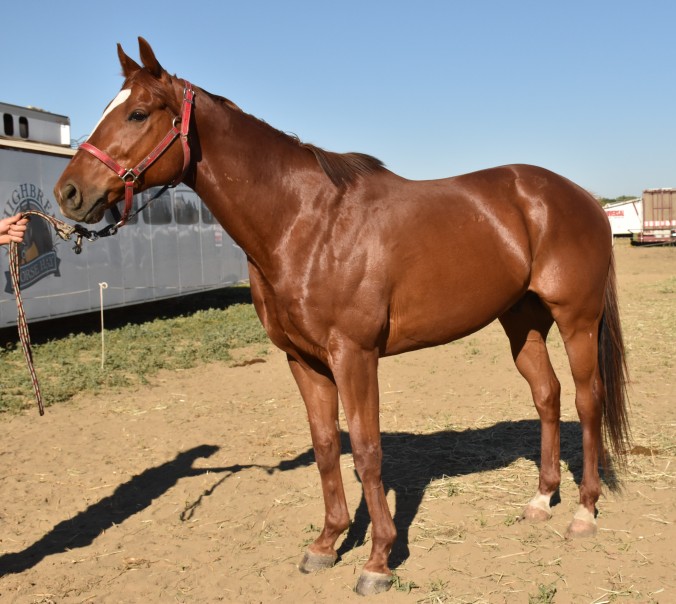 The rest of my morning was busy taking photos of the horses and getting things organized for our auction sale at the Calgary Stampede on Saturday July 14.  It feels and Sounds kind of funny me saying we’re having an auction sale.  Seems surreal. At any rate, it’s really going to happen.

Jim, here is quite the horse.  He’s one of the 20 that will be sold on that day.  We bought Jim from Cody, our son, who bought him from retired chuckwagon driver, Jim Nevada.  Yes, that’s how he got his name, after Jim.  He’s a very good Right Wheeler that never quiets and runs like the wind.  This horse is one of Rick’s favorites. 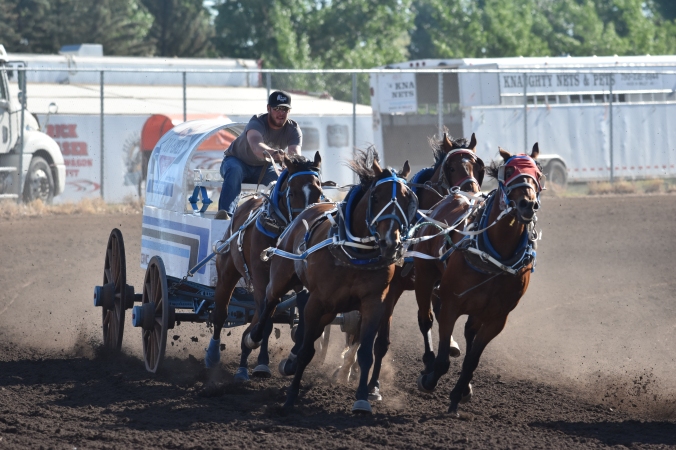 While doing my morning things, the track was a busy one with wagons hooking up some teams for practice.  Among those going around, was our outrider, Chance Flad.  He is looking to race a chuckwagon in the near future, so he needs to prove himself by racing against another wagon driver, and in front of some drivers to show he has what it takes.  He did very well and will be an asset to the  chuckwagon tour one day. 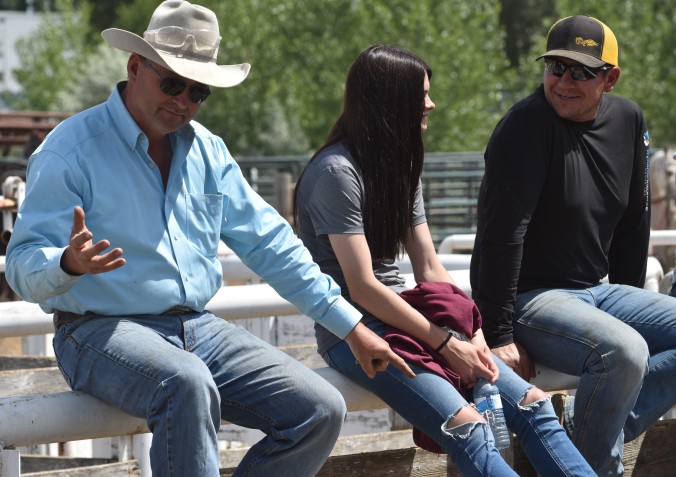 While awaiting our time to race, we always go to the infield to watch the first three heats.  Today Rick was sitting with fellow driver Obrey Motowylo and his hired gal.  Rick is not a fan of jeans with holes in them, so he had to make it known to her, and tease her just a tiny little bit. 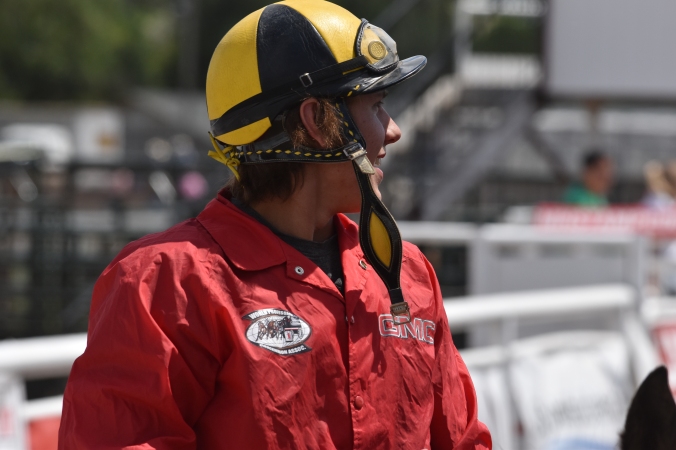 Obreys son Ethen, is becoming one of the top outriders quite quickly.  When he started just a few years ago, his dad hired him to ride behind his chuckwagon for each and every race regardless if he made mistakes.  And when you are starting out, just like anything in life, it takes time to fine tune yourself to get better and better.  I give a high five to Obrey and Ang for keeping him under their wings no matter how many penalty points this would have put on their team while he was just a beginner.  Good on them.  Today Ethan has quite a few rides, and I know he will become a World Champion Outrider, it’s just a matter of time. 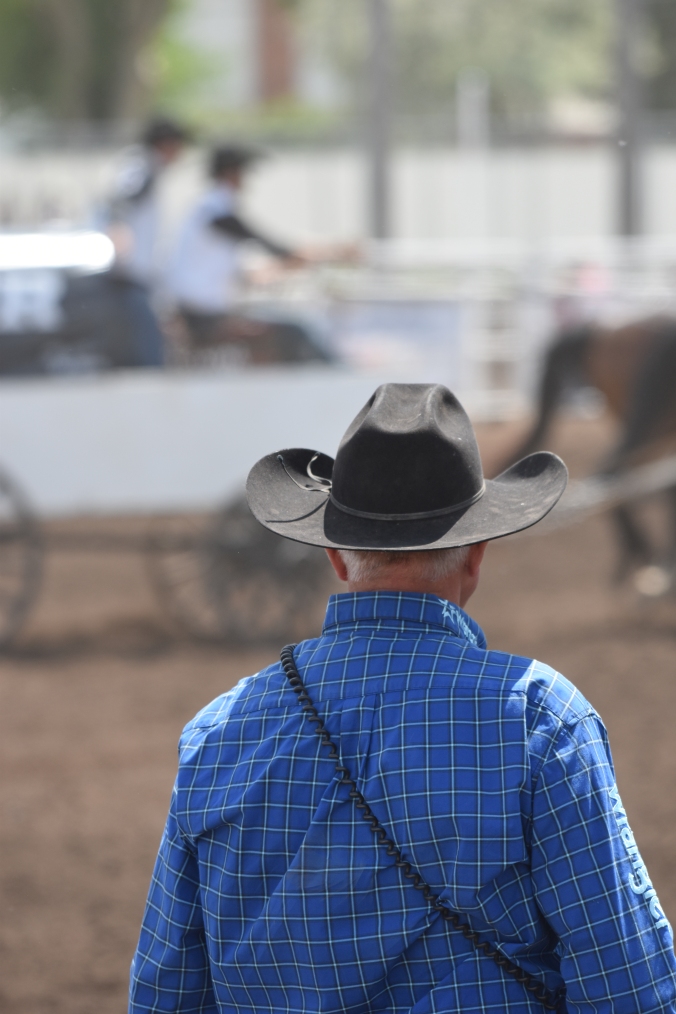 The Association has an arena director to keep things running smoothly and help out where he can when things get going.  Retired Veteran Chuckwagon Driver, Buddy Bensmiller takes his job seriously and does a pretty good job when issues arrive.  Keeps him on his toes. 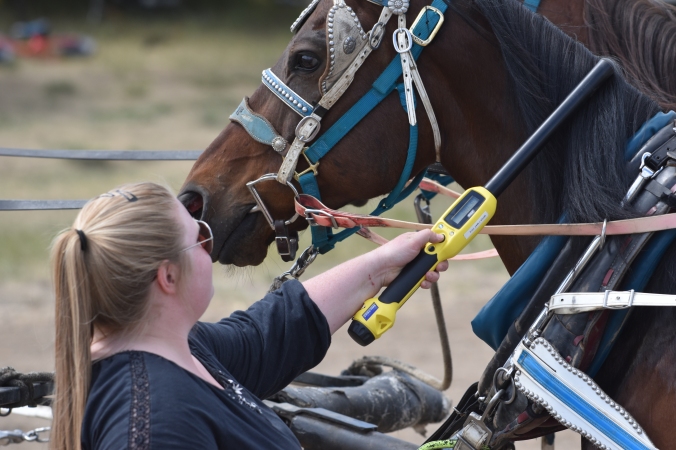 Before the drivers enter the track for their heat, we have a gal that wands the neck of the horses, checking its numbered chip that was inserted to make sure our horse lineup is what we said we were running when we entered it into the app on our phone for the office to oversee.  It’s just a measure to the rules to make sure the horses are racing only the allotted times that the rule book says. 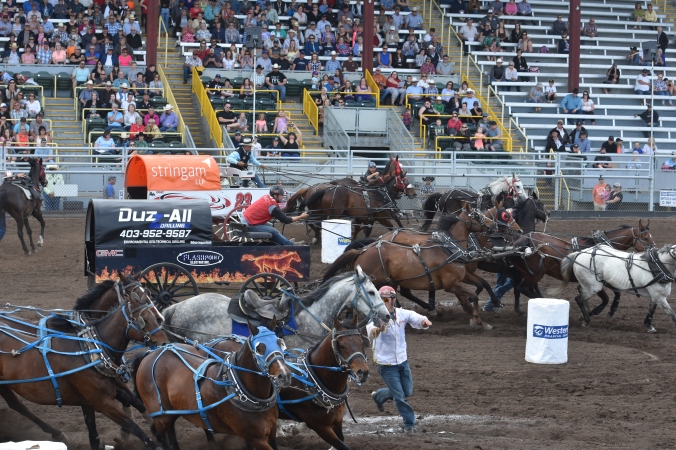 I love this shot as there is so much going on while it was taken shortly after the horn had sounded.  Still photos can really tell a story when you look at them.

Rick hooked Louie the grey on the Left Lead, Nickel on the Right Lead, Sporty on the Right Wheel, and Jim on the Left Wheel.  Chance Flad rode Stadium and Rory Jervais rode Ice.  This team rocks!  Rick raced two wide, with this team and they hung in there for a time of 1:02.48 which put him 3rd on the day.  Another very good run. 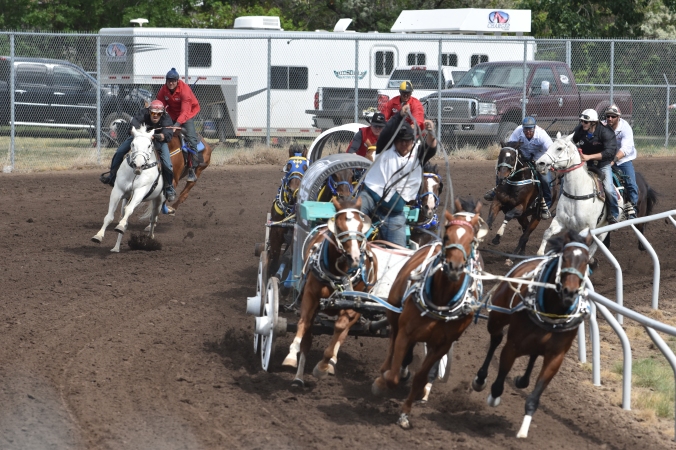 A huge congratulations goes out to fellow driver Cody Ridsdale and Katrina on their first ever World Professional Chuckwagon Tour win.  They ran very well these past four days and it shows. 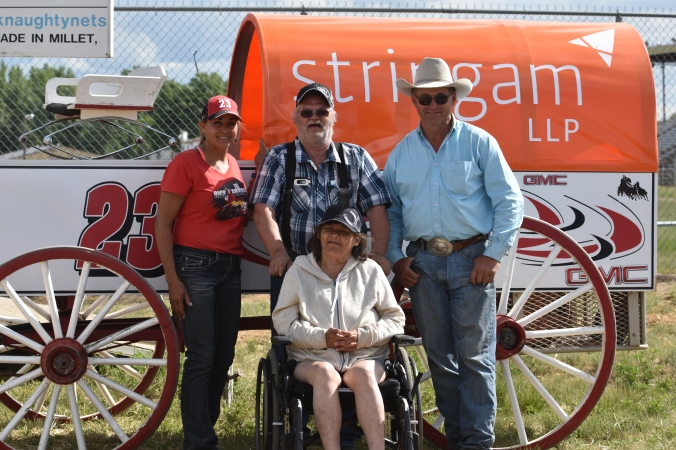 After the dust settled, we had some long time fans come to say hello, get a poster and a picture taken as well.  It’s always interesting to ask where their journey following the wagons has taken them and who do they cheer for. 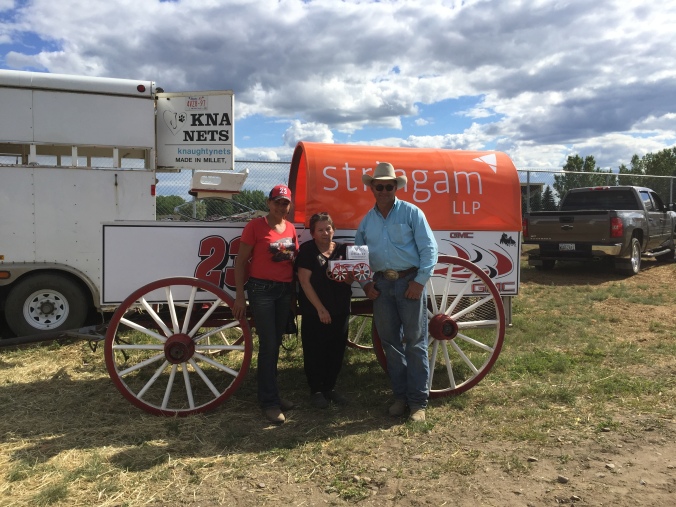 This wonderful lady came back to our barns to say thank you for the mini Chuckwagon.  She was pretty excite to receive it as she has been cheering many of the drivers on for years.  I always said, it doesn’t matter who you cheers for, just as long as your cheering for somebody. 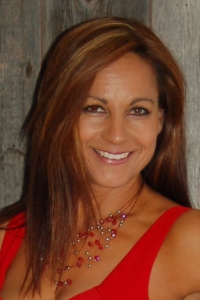 P.S. Someday, everything will make perfect sense.  So for now, laugh at the confusion, smile through the tears, and keep reminding yourself that everything happens for a reason.

My inner alarm got me up at 6 AM, and away I went out the door for a morning run.  The air was cool, and the clouds were plenty and I felt that it wouldn’t be long before the rain came down.  Well, we  were pretty fortunate, as the morning continued, only a very small sprinkles came fell upon us in our area. 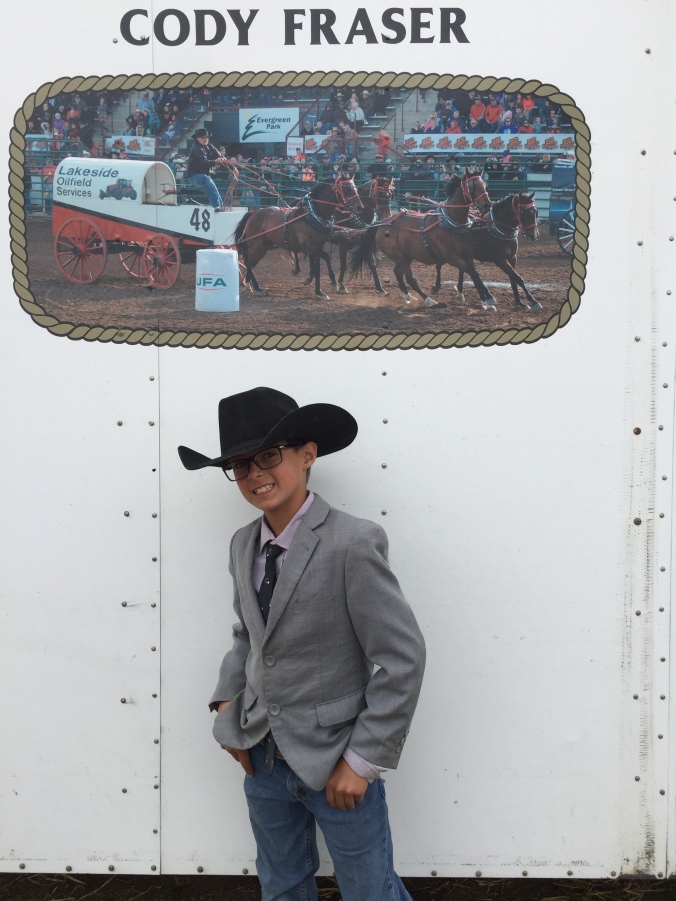 I was pretty excited to have our daughter Amy, her husband Chris and their son Coy stop in for the day.  We stopped in at the local Farmers Market and then found some garage sales to go to in the area.  I’ve been know to be called the Garage Sale Queen as I can find a sale just about anywhere and I pretty much always come away with some pretty good deals.  Today was no exception as Jenn Dorchester messaged me, wanting me to look out for a bike for Connor.  Well I did find one for a pretty good deal and it came back to camp for Connor. 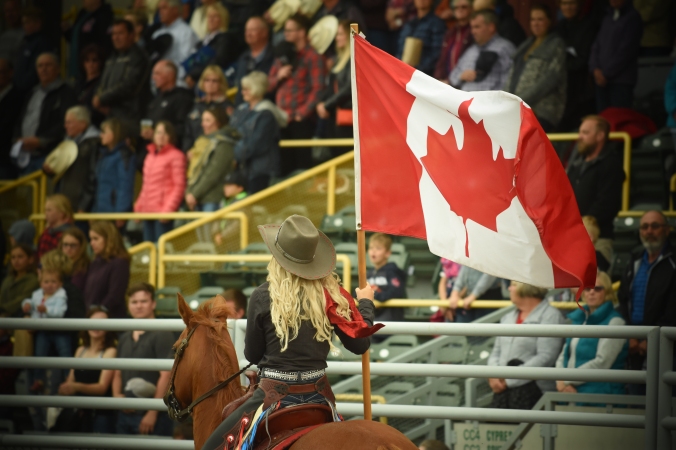 Proud to Be Canadian

At every show, we begin with the singing of our national anthem.  Here in Medicine Hat, the Royalty girls flew the Canadian Flag around the infield on their horses.  Always a proud moment for me, as a Canadian. 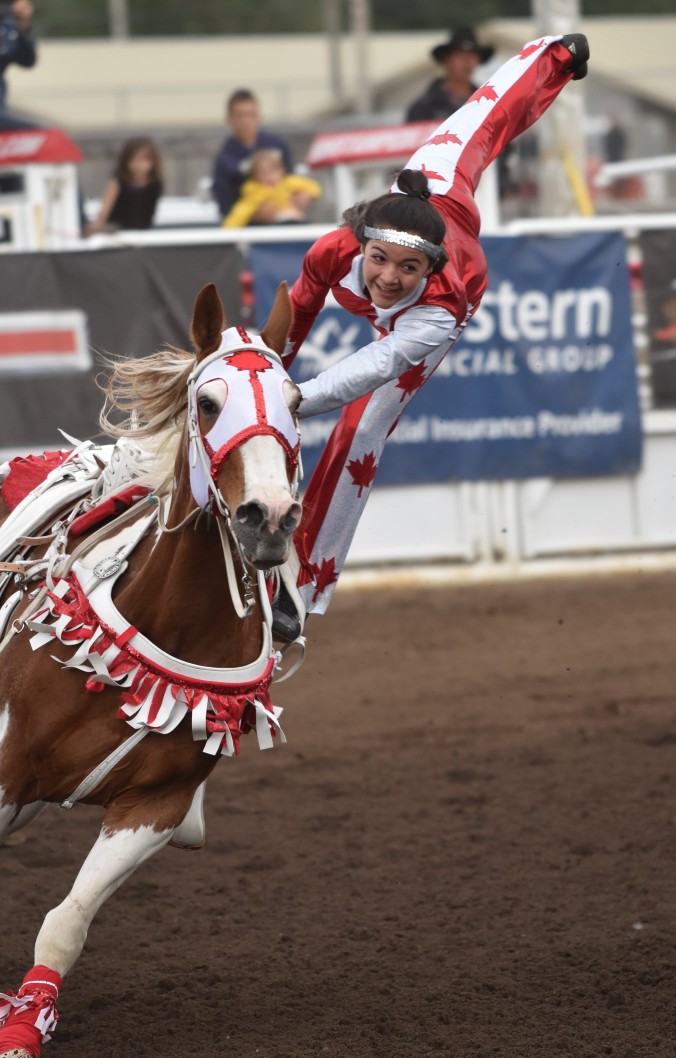 An opening act here was the Trick Rider girls.  Paynton Bensmiller, daughter of Lisa, whose husband Vern drives a chuckwagon, stays busy entertaining everyone.  She thoroughly loves her special gig, and is growing into a fine young gal 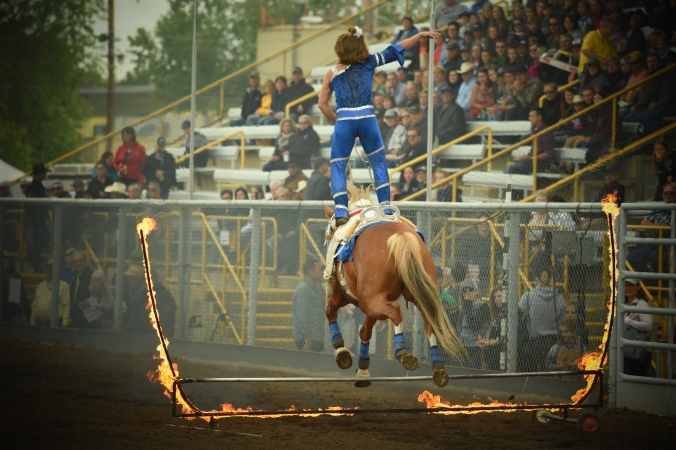 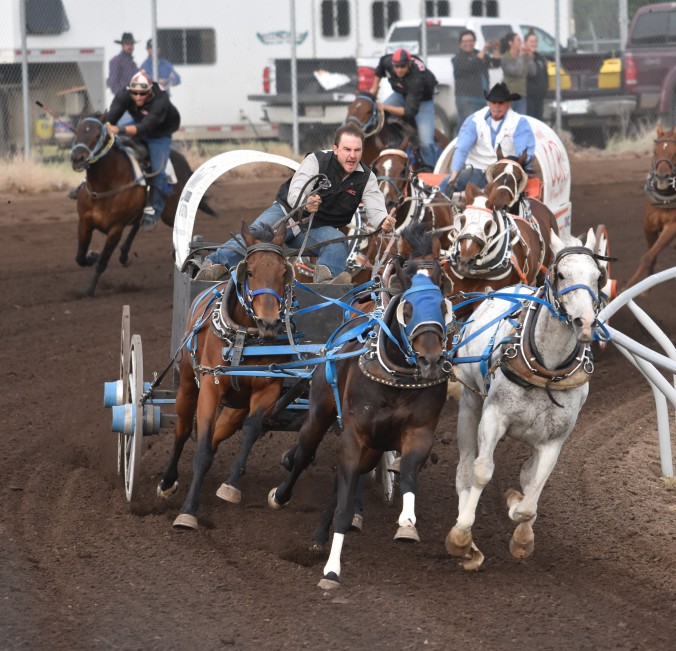 I captured this shot of fellow driver Chanse Vigen running a speedy race.  He was driving for his dad Mike, as he had to sit out due to some medical issues.  Well it seemed to be the thing to do, as Chanse managed to capture a day money run with horses that they hooked.  What a great feeling that is! 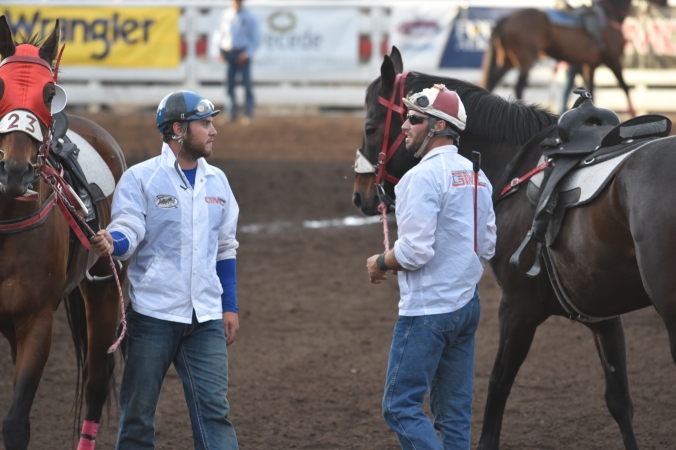 Before Rick had entered the arena area, our outriders Chanse Flad  riding Stadium and Rory Jarvis riding Ed, were chit chatting away.  Not sure about what, but maybe something to do with the horses they were riding and how the race was going to go.

As the team was coming into the infield, the Grey and Chestnut were ready to go.  Rick hooked Louie on the Left Lead, Spin on the Right Lead.  Cowboy on the Left Wheel and Vegas on the Right Wheel.

Rick was off the one barrel tonight, Chad Harden on two, and Luke Tournier on three.  When the horn sounded, Lukes outfit started first.  But just as he was getting around the top barrel, his team kind of jack-knife as he was trying to get around the it and this slowed him down tremendously.  Chad and Rick were full steam ahead.  However though,  Rick was so close to that barrel, he moved it over just a few inches.  My breath stopped for a few seconds or so, until I could see all was good to go.  No crunched barrel. 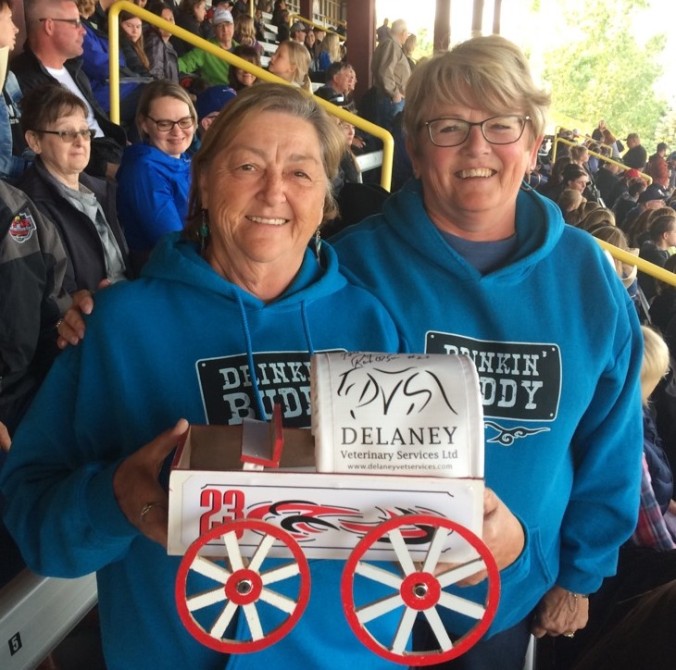 We were pretty excited when we heard of the two recipients of the mini chuckwagon tonight.  They were pals, and Brenda had worked for our Sponsor company Springam LLP for many many years.  The two gals decided that they are going to share the little wagon.  A few months at the one house, then the next few at the others. How good is that? 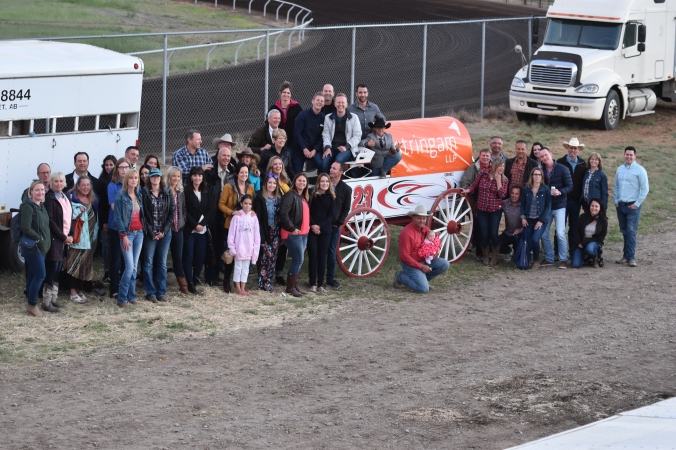 A Night to Celebrate

When the horses were fed, watered, washed,  and put away, our sponsor group stopped by to explore the chuckwagon and venture into the barn to meet the ponies.  So many newbies that didn’t know a thing.  But when it was time to leave,  they seemed just a little bit more knowledgable about the whole darn thing.